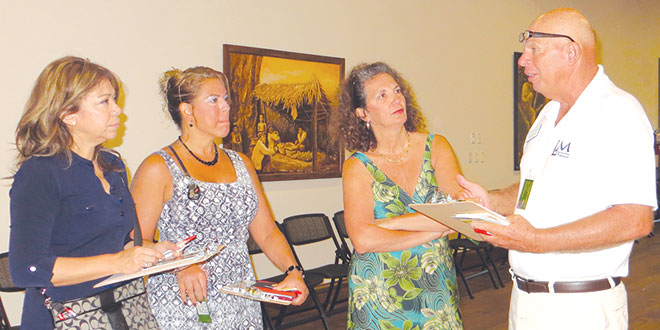 There it is — networking in 60 seconds! Marco Island’s Chamber of Commerce recently challenged about 30 members and guests to promote themselves and their businesses during a “speed networking” tutorial led by Gina Sisbarro, local children’s theater director and guide of Marco Island Murder and Mayhem Ghost Tour.

Participants sat in one of two lines of chairs, facing each other. Those seated on the left spoke first. Then it was the right-siders turn to give their introductions. After two minutes, Sisbarro gave the signal to switch and the right siders slipped into the next seat, while the participants on the left remained in their original spots.

Networkers exchanged cards, information and contacts with lightning speed. At the conclusion, there was still time to make contact with the people on your side who you may not have met.

“We’re here to teach you how to network wherever you go; help you learn to meet and greet,” Sisbarro said. “Start off by stating your name, the name of your company and what you do. Then concentrate on one thing you do. Pick the product and sell the product; then ask for a contact.”

Sisbarro cautioned participants to avoid falling into the social circle, like siding up to a friend and talking about the kids. “Keep it all business,” she instructed. Closing off into little groups of circles is another networking no-no, according to Sisbarro. She recommends standing in an inviting half-circle, allowing newcomers to come into the conversation easily.

By the conclusion of the session, we had all met more than a dozen new people, downed way too much coffee and learned how to keep our circles and business prospects open.