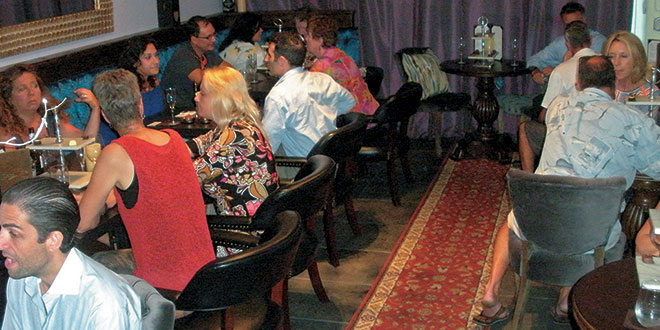 Connectivity-Me’s recent speed networking session was a hit with participants and the organizers.

Speed networking is a fast-paced, structured way for participants to interact, in a series of brief information exchanges.

About 20 people turned out to make connections at the Connectivity-Me session to promote their business or organization. The late afternoon event began casually, with the attendees chatting informally in the lounge at Dolce Mare Sweets in the Marco Walk Plaza, which provided samples of its chocolates, along with champagne and wine.

Next, they paired off for the formal networking, in which the duos meet one-on-one for four minutes before splitting up and each person moving on to meet with a new partner. The process was repeated until everyone had had a chance to meet.

“We felt it was fantastic,” said Kristina Lambros, director of events for Connectivity-Me, a Marco Island-based networking group formed in late 2014. 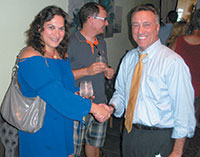 the Marco Island Center for the Arts.

“I met a lot of interesting people and even got a few phone calls out of it,” he said. “It’s like speed dating. It’s four minutes, two minutes apiece and you’re moving on to the next person. Even if you meet someone socially, it usually takes longer than that to develop some sort of rapport and to tell them about your history, so speed networking is a faster way of doing things.”

Kevin O’Fee, a financial advisor for Edward Jones Investments who is opening a second office on Marco for the company, agreed. Like Wenborg, he also attended the session at the Center for the Arts.

“I’d never done it before coming to Marco, although I was somewhat familiar with the concept,” said O’Fee. “Candidly, I was a little skeptical. But, I think it’s terrific for people, like myself, who are trying to build their business and what I like about it is that it encourages people on Marco to do business with business people on Marco. I think that’s really important for the business fabric.”

Connectivity-Me holds the speed networking sessions periodically and the group doesn’t have another one scheduled, at present. However, the organization is collaborating with the Center for the Arts on its “Let’s Grow” wine and cheese reception, set for 5:30 PM, April 19.