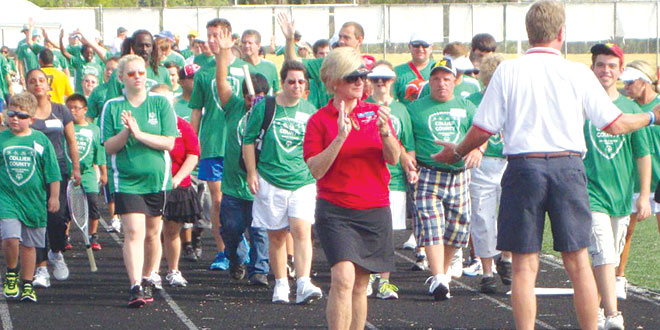 Hundreds of Special Olympics athletes from all over Southwest Florida competed at the March event. SUBMITTED PHOTOS

As a prelude to the Special Olympics Summer Games held at Walt Disney’s Wide World of Sports this May, hundreds of athletes from all over Southwest Florida came to compete in the Special Olympics held at Golden Gate High School in March. Special Olympics Florida trains individuals who are intellectually challenged for eight weeks prior to competitions. The program offers the coaching and competitive events absolutely free, in an effort to provide opportunities for physical fitness and preparation for entering other

These athletes are amazing and inspirational. They are supported by their families, friends and coaches to do their best. “They go out and give it their all. It is a moving experience,” said Bill Filbin, a local realtor who has been volunteering with the Special Olympics Florida program for more than 25 years. Filbin’s enthusiasm must be contagious, as his fellow Knights of Columbus members from San Marco Catholic Church showed their support and worked the games as well.

A group from the Knights of Columbus from the San Marco Catholic Church volunteered at the Special Olympics event.

include track and field events, such as 100-meter dash, a 3K race and long jump. They also held tennis, bocce, cycling and soccer. Thousands will compete in Orlando in May. Other summer events in this area include Stand Up Paddle, golf championships, aquatics championship, bowling, gymnastics and flag football.

Athletes have strong support to achieve their physical goals, and they have the emotional support to compete as well. Their motto: “Let me win. But, if I cannot win, let me be brave in my attempt.” Good luck in Orlando!