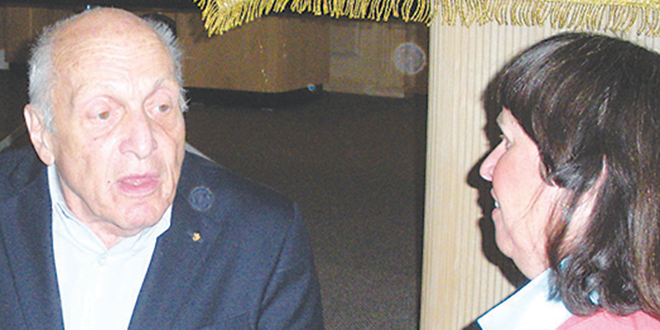 Harry Ettlinger, of the original “Monuments Men” chats with Brenda Pollard, after his recent presentation at the Jewish Congregation of Marco Island.

Millions of viewers around the world were entertained and informed by the 2014 movie “Monuments Men.” But for Harry Ettlinger, the movie was more than the cinematic depiction of a little-know, but real-life event. What he saw on the screen represented the dramatization of real-life experiences because he was one of the original Monuments Men.

Ettlinger recently discussed his experiences with the special group that recovered and returned to its rightful owners art stolen by the Nazis, at The Jewish Congregation of Marco Island as part of the Saul I. Stern Cultural Series. The Monuments, Fine Arts, and Archives section was formed at the end of WWII to preserve the culture of the European nations that served as the conflict’s battleground, he said. Between 1944 and 1951, the group rescued 5,000,000 works of art, which were returned to their owners. The art retrieved included works by Rembrandt, Matisse, Van Gogh, the windows from the Church in Strasbourg and more. “I think we should be very proud of that,” said Ettlinger during his presentation. “We preserved them. We didn’t steal them.” Many of the all-volunteer Monuments Men had experience as museum directors, curators, art historians, artists, architects and educators. But Ettlinger was just 19 years old, one year out of high school, when he joined the group in May of 1945. Ettlinger’s inclusion had everything with a valuable skill that was part of his background. After being drafted into the U.S. Army following his high school graduation, Ettlinger was part of the contingent sent to Belguim to in 1944 to prepare for the Battle of the Bulge. But for reasons he never learned, he was transferred to another post and by May of 1945, at the war’s end, he found himself at post in Munich. It was

there that Ettlinger volunteered for duty where the language of his birth, German, would prove useful, which led to his becoming a Monument Man. Ettlinger was born in Karlsrube, Germany in 1925, but the Nazi’s persecution of Jews forced his family to flee to America in 1938, one day after his Bar Mitvah. They settled in Newark, N.J., where he attended high school. The Nazis systematically looted art from churches, synagogues, the homes of the wealthy, as well as holocaust victims during their invasion of much of mainland Europe. They cached their plunder in salt mines in southern Germany and other locations. Ettlinger spent two months in charge of crews charged with retrieving, cataloguing and repatriating art treasures stored in one of the salt mines. The first items that he returned were stained-glass windows from Strasbourg Cathedral, which, along with the other fine art found in the mine, were brought to the Louvre in Paris. Playing a part in the massive cultural rescue felt good, he said. “It was the right thing to do. When you do something that you know is the right thing for the way you live, your culture, you feel good about it, don’t you?” After being discharged in 1946, he used the G.I. Bill to attend Newark College, where he received a degree in engineering. Ettlinger worked as mechanical engineer for 45 years, retiring 23 years ago. While Ettlinger’s role in the Monuments Men was portrayed briefly in the film – he was shown driving a Jeep, he was disappointed that time wasn’t taken to show the nature of his work. Ettlinger said he found the movie to be “entertaining” and “recreational. “But on a personal note, I was disappointed that they didn’t show what I really did. I mean, driving a Jeep? Come on.”