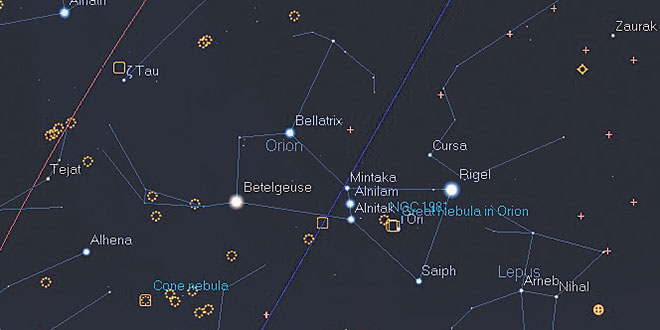 For some reason the brightest stars in the sky make their appearance in the winter. We’ve discussed two of the brightest — Betelgeuse and Rigel — several times before; but is always nice to see them again.

Extend the line formed by Orion’s belt stars upwards to find Aldebaran. It is the orange eye of Taurus the Bull, who seems to be forever fighting Orion. Turn your gaze to the left to find the bright star Capella, commonly nicknamed the goat star as ancient artists depicted Auriga holding a goat.

Drop back towards the horizon to see two about equally bright stars, Castor and Pollux, which are part of Gemini. To the right and slightly downwards is Procyon, and to the right of that is the brightest of all stars Sirius. If you start at Aldebaran proceed counter-clockwise to the above mentioned stars and finish at Rigel and then Betelgeuse, you will see you have followed a giant “G” shape in the sky!

Notice how bright stars, particularly Sirius, sparkle and flash different colors while near the horizon. This is caused by our atmosphere being thicker and rather unstable near the horizon. Inexperienced star gazers almost invariably wonder if they could possibly be UFO’s, particularly since the stars are close to fixed objects such as trees which makes the motion of the stars more obvious. Planets don’t twinkle as much as they are tiny disks instead of dimensionless points of light, but even they will twinkle if the air is unstable enough. A few years back I was with two teenagers who spotted Venus very close to the horizon twinkling. First words out of their mouths were: “Is that a UFO?”

Notice that Aldebaran lies inside a “V” shaped group of stars that form the base of Taurus’ horns. These stars form the Hyades, one of the few open star clusters easily visible to the naked eye. Aldebaran is not a member but merely lies along the same line-of-sight less than half the distance away. These stars are more spaced out than the nearby Pleiades (appearing just off tonight’s chart) largely because they are so much closer.

Carefully scan the whole area of Orion with your trusty pair of binoculars; there are quite a few interesting objects in this region. In particular, the Great Nebula in Orion is even visible to the naked eye.

Mr. Usher is a Director of the Everglades Astronomical Society which meets the second Tuesday of the month at 7 PM in the Norris Center, Cambier Park, Naples. E-mail: usher34105@earthlink.net