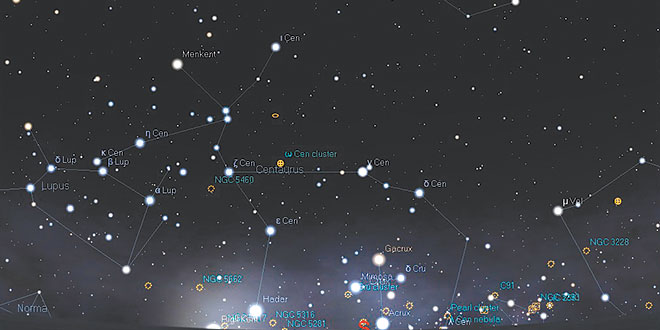 Did you see the Lunar eclipse last month? We scored a reasonably cloud free night and everyone got at least a decent view. If you missed it, don’t worry. You will have another chance this coming October and twice more in 2015. A group of four consecutive lunar eclipses viewable from North America is modestly rare – the last time was in the 1990s.

This time of year is the annual spot the Southern Cross challenge. What is needed is a good clear night and an unobstructed view of the southern horizon – preferably a view of the ocean. Altitude helps too, even something as short as a ladder. The top three stars of the Southern Cross are fairly easy given a clear night; the real tough one is the bottom star, Acrux. It is one of the brightest stars in the sky but the proximity of the horizon and the thick air near it dim it to near invisibility.

A much easier target is the giant globular cluster of Omega Centauri; in the chart tonight is located just above the “a” in Centaurus. Dimly visible to the naked eye as a fuzzy spot, it is actually the largest globular cluster in our galaxy and one of the largest in this corner of the universe. It contains perhaps one million stars spread over the sky in an area considerably larger than the apparent size of the Moon. (It’s actual size is about 180 light years across.) It’s fairly easy to see the ball of stars in binoculars and in a large telescope it’s breathtaking.

For naked eye observers, tonight notice that the constellation Centaurus is low in the south. Not a particularly bright constellation, Centaurus has no competition from nearby bright stars so it is relatively easy to find – just look due south and there it is! Given that Centaurus is an ancient Greek invention, an astute observer might wonder how the Greeks could have possibly seen it; from Athens today perhaps only two or three most northerly stars in it are visible. The answer is that in ancient times Centaurus was higher in the sky. In fact, it was nearly the same height as we see it today in much more southerly Marco Island. The answer is that precession of the equinoxes has rotated the heavens slightly since that far distant time.