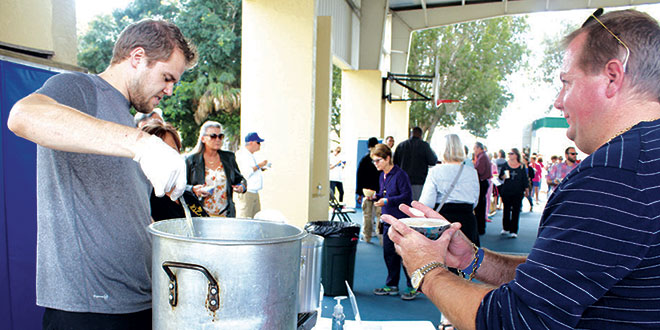 On Saturday February 6, the day before the actual Super Bowl, the Marco Island Chamber of Commerce held their fourth annual “Souper Bowl” event in an effort to raise money for the Leadership Marco Scholarship Fund. And though Beyoncé wasn’t available to perform at the Mackle Park Airnasium, hundreds of people showed up to support their community, and to eat lots and lots of soup provided by the ten different local restaurants.

It started as a cool, overcast day – a perfect morning for hot, homemade soup. Hundreds of people lined up, spilling out onto the Mackle Park soccer field. Once inside, Souper Bowl-goers were able to pick from one of the over 1,200 bowls that were hand painted by local students, volunteers, and other members of 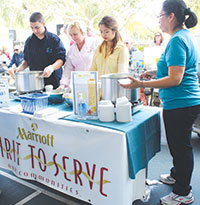 The Marco Island Marriott was also present that day to support the Souper Bowl. Their restaurant Quinn’s on the Beach served chicken pozole verde soup.

the community. After that, it was soup galore. There was no right way to go about eating the different soups and chowders. You could go clockwise, counterclockwise, crisscross, or you could just follow your stomach.

Each restaurant provided about 20 gallons of soup. While that may seem like a lot of soup, the event was so popular that the restaurants had to constantly refill their pots.

This year the Souper Bowl raised approximately $16,000. That money, combined with the proceeds raised during the organization’s other fundraising event, Wet Paint LIVE, will be distributed to a number of local students come spring. Each year as many as 20-30 students apply for the scholarship. The Leadership Marco scholarship committee narrows that number down through the application process, and determines the number of 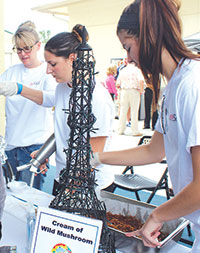 The women of Petit Soleil worked like an assembly line to distribute their cream of wild mushroom soup. First the soup wasscooped into a bowl, then it was sent down the line and topped with fried onions and a dollop of sour cream.

scholarships they can award, as well as who the lucky scholarship winners will be. Last year ten local students received scholarships to assist with the high cost of college.

“It has been an honor and privilege to work on this beautiful event that is so strongly supported by our community,” said Lisa Meurgue, a member of the Souper Bowl Committee. “The schools and restaurants fully support our efforts and it always turns out to be an amazing day! It’s a great feeling to raise the money and award the scholarships.”