Some Things Should Just Stay Broken 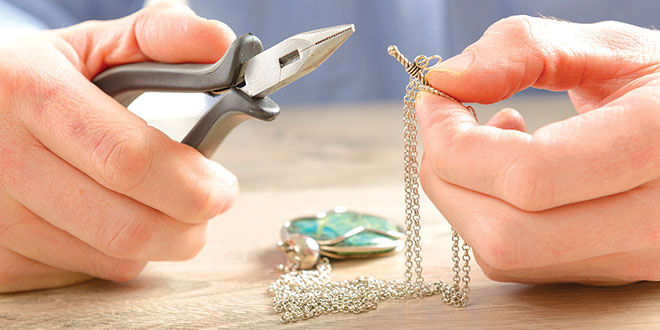 ALL THAT  GLITTERS
Richard Alan
harborgoldsmith@comcast.net

I fix this, repair that. A solder here, a laser weld there, and lately the use of quick set epoxy glue and enamels have their merits.

You already know if you enjoy or dread reading my column that I have acquired an excellent reputation repairing or restoring almost any piece of jewelry that enters my establishment. (Not to mention household objects, such as statues, dog collars, ladies shoes, belts, electric razors, Rolls Royce and Bentley interior parts, sunglasses and numerous ceremonial pieces from all religious denominations.)

News of my expertise also has crossed the Atlantic ocean for a lot of my clientele hail from Great Britain, Ireland, Scotland, Finland and Germany to name a few.

I’m flattered but the problem is…I’m a goldsmith not an all-around handyman, and some of the broken things presented before me are baffling as to why a person would bring them to a jewelry store in the first place?

I tried to explain to a gentleman that I have no idea why his garage door opener refuses to function. Try the sandwich shop next door. Maybe he can help you! Take broken electronics to a goldsmith? First place I would go?

Just last week a guy handed me a bunch of watch parts in a box, as if it was a wounded sparrow. It was — and I mean WAS — his favorite watch. “Can you put this back together?” It was the same brand of watch I wear, a Tag Heuer; only he has been wearing his for 30 years or more. Problem was the watch runs fine, but the bracelet is a basket case in a box. All the watch’s links have separated from each other. Every connecting pin is worn out. Even the snap catch no longer snaps closed. It’s time for a new bracelet.

Last time I checked for a replacement bracelet for a gent’s Tag Heuer watch, the cost was more than $900, and I doubt they would have one this old in stock. Even if they did, this guy isn’t going to pay me nine Benjamin’s for a watch strap.

So I have made up my mind — even with help from above — there is no chance on earth I can repair this thing. Problem is I can sense this guy is not going to accept no as an answer. I caved in (Yet again!), and told him to leave it. I will see what I can do.

What an Idiot I am. I have a better chance putting a smashed crystal Humpty Dumpty back together! A week later, while enjoying several nights of insomnia, the answer to repairing the impossible hit me, and I finally fell asleep repairing the watch bracelet in dreamland. Well, believe it or not, I figured out a way I could fix it, but three or four hours of a goldsmith’s time is going to be costly. So I called him to let him know the cost. He said out of the question; I said come get it broken because I am not charging $10 for three hours of my labor. I guess it wasn’t so important once he understood I have to get paid for the impossible and even more for a miracle.

The saving grace and miracle maker is my shop’s laser welder. My uncles who taught me the business are probably rolling in their graves and could not imagine a newfangled space laser-ray contraption to make or repair jewelry in their lifetime.

Same goes for some older watches. Sometimes they just go kaput, dead or just plain give out. A new battery won’t change anything. If you are lucky enough to find a talented watchmaker who can install a new movement, there may be a chance, but that can sometimes cost as much as a new watch. That to me is foolish because it will still look worn out and beat up, but it will tell time.

While we are on the subject of watch battery replacement, while I rarely get a complaint of my services, there are some who complain about the cost of “a simple battery replacement.” Sure, I always hear the flea market will do it for $1. I can assure you, I don’t do anything for a buck.

There are several things to consider. First, the quality of the battery. Cheap Korean batteries cost $1 for six of them, but who knows how old they are? Plus, they will corrode and leak battery fluid in your $20 Timex as well as a $20,000 Omega, and it’s guaranteed to render it worthless.

Next is putting your trust in some inexperienced Cretan who is gouging and scratching away at your precious watch like he’s shucking an oyster, trying to figure out how to open it. By now, your waterproof gaskets have surly been ruined, so after installing the junk battery he throws away the gasket cause it no longer fits due to damage and expansion. (In many cases, a new gasket has to be installed along with the battery change.)

Now you have it, a new battery for next to nothing you savvy penny pincher…a $1 flea market battery change. Only now, the back of your wife’s beautiful watch looks like it took a ride in the garbage disposal. The waterproofing is non-existent, and you are now the proud owner of a guaranteed-to-leak, cheap-a#@ battery.

There are millions of different kinds of watches and hundreds of battery sizes and voltages. The wrong one can ruin the movement or make the watch run irregular. There are also several important and expensive tools required to open many high grade watches and inexpensive as well, without damaging them. No proper tool; no new battery.

Although I change hundreds of batteries a week in season, there are a few makes — like most Ebels or many Omega models — that have to go back to the factory or an official repair facility for “a simple battery change,” and that is that; end of story. I guess it is to keep the warranty intact, or they purposely design the watch so only the factory can do it. That can get expensive due to insurance and shipping back, so on and so forth.

When it comes to repairing fine jewelry, there is very little my son and I cannot repair like new. Costume jewelry is another story. Every piece is a challenge.

Costume jewelry is just that. It can only give you what it can, and then it breaks apart or the faux stones fall out. The plating comes off. Most are made out of gold or silver plated lead or slush metal that melts at the temperature made by an ordinary match stick.

It’s a jeweler’s nightmare. There are times I get inundated with the stuff. Most I can repair and some I gracefully refuse to do, but not because I can’t fix it. It is because honestly most folks won’t pay me for the time it takes to repair pretty much a worthless article: “Oh, I understand it’s a sentimental piece of costume jewelry. It’s going to cost $15 to repair.”

I guess it’s just not sentimental enough? It saves a lot of wasted time for me to just say it can‘t be done.