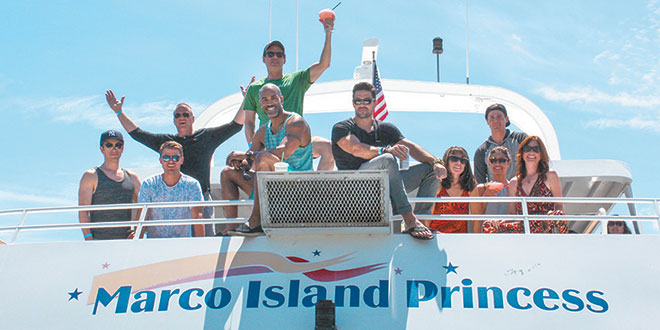 Soap operas have long been a form of daytime entertainment. Many of the longest-running scripted television shows are a product of the genre. 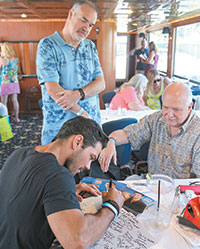 Due to this longevity, it seems that the soap opera fan base isn’t married to just one age group. Many of the participants at Soapfest had been fans of the genre for over 20 years, while others were just getting started.

“Even if you’re not a soap fan it doesn’t matter, said Pat Berry, co-owner of the Island Theater Company. “It is so fun. That’s the point I’m always trying to get across. You don’t have to be a soap watcher to support the kids and have a good time!”

The four-day long fundraising weekend kicked off with a private welcoming party for sponsors.

It wasn’t until the next day, however, that Soapfest really got things started. On Saturday the popular, “A Night of Stars” event took place at the Marco Island Yacht Club. There the actors played a fun game of “Never Have I Ever,” and answered fan questions.

The following day the stars hopped aboard the Marco Island Princess out of Rose Marina, for the “Cruisin’ Boozin’ & Schmoozin” tour. During the first half of the cruise the stars mingled with fans, taking selfies and signing autographs. About halfway through the three-hour ride, the auction, led by the ever-energetic Christian LeBlanc of “The Young and

the Restless,” began. The major items up for bidding were portraits painted by the actors and the children/adults who will benefit from the fundraiser. Other items included special passes for upcoming fan events and some of the actors’ personal effects. “General Hospital’s” Ryan Paevey a self-described “watch guy” auctioned off a watch from his own collection. It went for upward of a couple hundred dollars.

“It’s been on a number of adventures with me,” said Paevey. “It’s been in the Pacific, the Atlantic, it’s probably got dust in it somewhere from the Nevada/Utah desert.”

The event continued later on that night for the “Celebrity

Karaoke Bar Bash,” an after party at Chad’s Martini Lounge. There the actors were put to work, bartending for the eager crowd. They would work in shifts, half bartending and half in line to sing a karaoke rendition of their favorite song. Brytni Sarpy of “General Hospital” chose to do her own version of the classic Britney Spears song, “…Baby One More Time.”

The weekend ended with the “Brunch with the Boys” event where fans were able to say their final goodbyes over brunch with mimosas.

Camp Able, a camp designed specifically for people with special needs is the biggest beneficiary of the event. For more info check out: www.campable.org and www.theateronmarco.com.