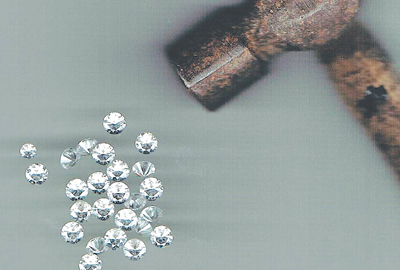 In many professions there are certain tricks of the trade of which the public may be unaware. What moving company would leave the garage without a pocket full of black or brown crayons to touch up dings and scratches that can appear during the moving process? Or grocers who wax or spray water on fruits and vegetables to give them appeal.

Same holds true for the jewelry business. Fancy, expensive lighting can make the worst quality diamonds or gemstones look more attractive when you view them in the store, Then, when you leave the store with your new purchase, that brilliant diamond ring doesn’t seem to shine as much as it did a moment ago.

Many porous gemstones such as turquoise, lapis, coral or malachite can be died or oiled to enhance its color and make it more enticing. The same for rubies, emeralds and sapphires that are heat-treated and oiled to mask imperfections that would be noticeable without the treatment.

One must be careful, for many harsh jewelry cleaners can remove the oils and dyes, thus rendering the gem unrecognizable to its owner.

Onto the questions… Why does white gold seem to lose its whiteness?

This has been a sore thumb subject in the business for decades; there is no simple answer. First, one must understand there is no such thing as a white gold mine; white gold was created by man by alloying or mixing certain metals with 24 karat yellow gold. Originally, I believe it was in the late 1800’s in Germany where they added palladium, a metal much like platinum only less expensive. It was the rage in the early 1920’s because it looked like platinum without the cost.

When a white gold ring is worn for several months, the scratches and dings can make the yellow color bleed through because the majority of the ring is, in fact, around 85% yellow. There can be as little as 15% of alloy in that white gold ring.

The industry was able to come up with a temporary fix with the discovery of rhodium. The process of plating rhodium in a liquid state onto the white gold ring gives it a hard-as-nails bright white finish. (Almost all white gold rings purchased today have been rhodium plated by the manufacturer.)

The problem is daily wear and tear will eventually wear the finish off and it will have to be re-rhodium plated to look like it did at purchase.

There have been breakthroughs in new alloy technology that have produced whiter white golds that do not require rhodium plating to keep it that way, namely white and bright.

I have worked with the new alloyed white gold but, in some cases, the alloy makes the ring very brittle and that’s not a good thing for prongs holding expensive diamonds or gemstones.

My jeweler up north told me I had a large chip on my diamond. How is that possible, I thought diamonds were unbreakable?

Someone has been reading too many Superman comics! While diamond is a hard material it is not unbreakable. Remember that old commercial of a diamond cutter splitting a diamond in the backseat of a moving Lincoln Continental? The cutter split the diamond in half with one single cleave. It was done by splitting the rough diamond crystal along its grain. Just like wood, diamonds have a distinctive grain under magnification. If one smacks a diamond against a hard surface such as a marble counter, or even the edge of a pot or pan, serious damage can result.

A word from the wise, never continue to wear a severely damaged (chipped) diamond for once a chip is exposed to other hard surfaces even more damage can result making the gem unrepairable or even worse, worthless.

My first experience with conflicting theories of diamond hardness was as a young apprentice diamond setter. While learning the trade, I was able to turn tiny diamonds to dust with an inexperienced slip of my setting tool; every stone I pulverized got deducted from my mediocre paycheck. Believe me, breaking a large one was out of the question! I learned to concentrate and not to slip while setting diamonds, but pronto!

My uncle once told me of a story of a stonemason who had purchased a large diamond ring from him and when the mason got back to his shop he demonstrated to his co-workers how hard his new diamond ring was by clobbering it with a five-pound steel sledgehammer… Guess what the result was?…diamond fairy dust! The insurance company paid for his stupidity.

The stone in my tanzanite ring is dull and no longer brilliant even when I clean it. What’s happened to it?

Time is not on your side! The stone in the ring is probably so scratched and worn from wearing that it may require a re-polishing. Tanzanite is a beautiful purplish blue gemstone with one serious drawback – it’s too soft. It is only a six to a seven on the Mohs scale (a diamond is a 10). The daily wearing of a tanzanite, especially a large expensive one in a ring, will result in scratches and blemishes in no time no matter how careful one is with it. I recommend setting important tanzanite’s in pendants or earrings that will result in less wear and tear.

The stone will have to be removed and re-cut or polished depending on the damage. This can cost several hundred dollars to bring it back to its original spectacular condition.

Richard Alan is a designer/goldsmith with over 40 years of “on the bench experience” and is owner of The Harbor Goldsmith. He welcomes your questions about All That Glitters. 239-394-9275 or harborgoldsmith@comcast.net