Snowy Egrets: One of the coolest birds on our beach 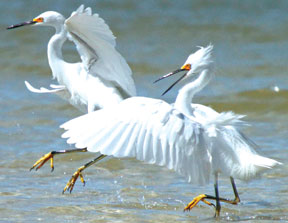 One of several larger shorebirds that are spectacular to watch while walking the beach, especially along the Tigertail Lagoon and Sand Dollar beach peninsula area, is the Snowy Egret (Egretta thula). Just saying the name can cool one off on a hot Florida day at the beach.

When walking the beach, one notices that there are several large white birds with long legs in the tidal zone and lagoon area. The Snowy Egret is easily identifiable by its bright yellow feet. Perhaps they are yellow galoshes?

Not the largest of the long-legged shorebirds, the Snowy Egret is typically around two feet tall, with a wing span of three feet. Its black beak and legs contrast with the bright yellow rings around their eyes and the bright yellow feet. They are year round residents of the beach, lagoons, marshes and wetlands. Eating small crustaceans, such as crab, shrimp and small fish, they swish the mud and sand with those bright yellow feet, hover over the area stirred up and then swoop down with their long necks, grabbing the prey with their long pointy beaks. It is like a well orchestrated dance pleasing to watch, especially if there are a few hunting together in the shallows of Tigertail Lagoon.

When courtship and breeding begins in March or April, adults will show red coloring of the lores (featherless skin around the eyes) and on their feet. The feathers on their heads, back and tails become lacy, like a ballerina’s skirt ready for opening night. Breeding pairs build platform type nests no higher than 20 feet within the branches of mangroves or coastal shrubs, such as coco plum. Around Marco Island, they 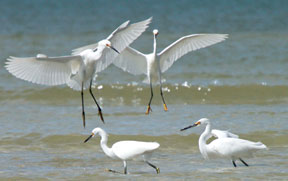 nest within the ABC Islands, the inside of Kice Island and, of course throughout the 10,000 Islands. The male will gather sticks and twigs and the female will construct the nest. Both take turns incubating the approximately three or four oblong, greenish eggs for about four weeks. When the chicks hatch, they are fed by both parents by regurgitation. As they grow, they will hop around on branches near their nest and eventually fly on their own at about twenty-five days old, leaving the nest area completely at two months.

Once on the brink of extinction, due to plume hunting in the late 1800s, the population is stable due to the federal protection of the Migratory Bird Act. Florida also recognizes the importance of this bird species, listing it as a species of special concern. These protections prohibit hunting, taking of feathers, eggs or chicks, or harassing the bird.

To help the Snowy Egret survive and thrive, please give it space on the beach when you see it; don’t chase or get too close, enjoy its beauty and behavior naturally. Remove all trash when you leave the beach, especially plastics, nets and fishing line debris. Don’t recreate close to bird rookeries such as mangrove islands. Quietly motor by giving the rookery plenty of room to lessen disturbance.

Get out, take a beach walk, if you see a Snowy Egret, take a moment and enjoy its beauty and behavior as it adds to the paradise we call Marco Island.

For any additional information or if interested in volunteering, please contact Nancy Richie, Environmental Specialist, City of Marco Island at 239-389-5003 or nrichie@cityofmarcoisland.com