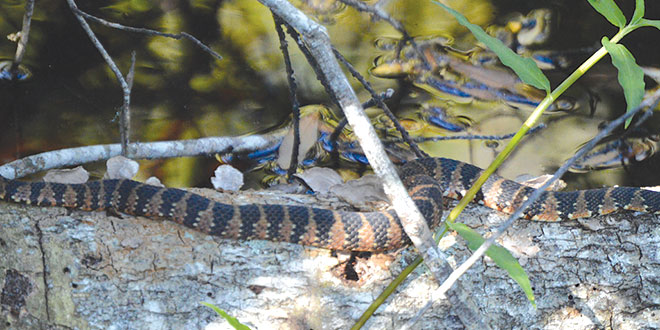 When I am not at work on Marco Island, I absolutely love giving tours of the Big Cypress Swamp. I mean I really LOVE it!!!! There are several diverse habitats in that area, and they support a wide variety of wildlife. People are positively fascinated to hear the facts about ‘gators, ‘crocs, hawks, eagles, owls…..and snakes.

One of the most common snakes is the Southern Black Racer, simply known as the “black snake.” These speedy serpents are very slender with a shiny black skin and can grow to more than 5 feet long. They seem to be constantly on the move and eat an astonishing variety of other animals, including frogs, lizards,

mice, insects and even other snakes. They are non-venomous.

The Rat Snake is one of the more colorful species and can vary from gray to yellow or, here in the Everglades area, orange. They also can grow to be 5 feet long and are proficient tree climbers as well as swimmers. Their primary prey is birds and rodents, which they constrict.

Florida is home to six venomous snakes, two of which are confined to northern Florida. In our area, it is possible to find the Eastern Diamondback Rattlesnake, the Pygmy Rattler, the Cottonmouth (aka Water Moccasin) and the Coral Snake. The first three are pit vipers, which means the venom destroys red blood cells and the walls of blood vessels. The Coral Snake’s venom is the most potent of any North American snake. Unlike the pit vipers, this guy is neurotoxic, which means the venom attacks the nervous system of a victim, bringing on paralysis.

The most common in the Big 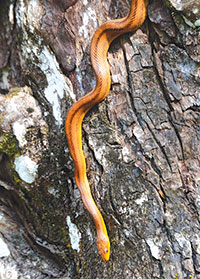 Cypress area is the Cottonmouth, or Water Moccasin. Though primarily found in water or along the water’s edge, it can deliver a bite either in or out of water. It can deliver a bite from any position so it does not have to be coiled. The adults are darker in color than the younger ones, which have distinctive brown and black markings. When swimming its head is well out of the water. It hunts mostly at night and its menu consists mainly of fish, frogs, lizards, other snakes and small mammals.

In summary, all of the above serve a purpose. They have specific menus that keep a number of other species in check. They are here for a reason — another stepping stone to understand the bigger picture of what happens in our surrounding areas.

Always be cautious around any reptile. Even if they are non-venomous, some can deliver a painful bite. Be respectful of them, and give them plenty of room to do what they are supposed to do.

One response to “Snakes of Big Cypress Swamp”