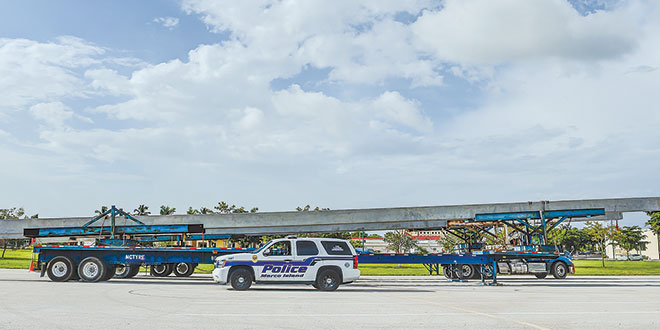 Work on the southbound span of the Smokehouse Bay Bridge is about 20 percent complete. PHOTO BY FRANK STEIGER

The sign posted on the exit door of the Starbucks at The Esplanade on Tuesday, Sept. 30, sent caffeine junkies into instant withdrawals. Starting Wednesday, Oct. 1, at 8:30 PM, the store would be closed — closed? — due to a boil water notice, and unless otherwise notified, the store would not reopen until Saturday, Oct. 4.

According to Jeff Poteet, general manager of Marco Island Utilities, bridge contractor Quality Enterprises will be tying in a new 20-inch water main that was recently installed as part of the $8.625 million Smokehouse Bay Bridge project. In order the installation to happen, a water shutdown is required. City staff met with The Esplanade Manager Grant Reed, and together, they determined that Wednesday night, Oct. 1, would be the best time for the shutdown, which will begin at 9 PM on Wednesday night and then turned back on by 6 AM on Thursday, Oct. 2.

So, why will those seeking caffeine need to get their buzz elsewhere? Well, Poteet explained, even though the water will be on, the area affected by the water shutdown will remain under a precautionary boil water notice. These folks will stay under the notice until two consecutive days of test samples show the water is absent of bacteria.

The test — Bac-T test — takes 24 hours from the time it starts get the results. Best case scenario, the boil water notice will be rescinded Saturday. Samples will be taken Thursday and again Friday to get results on Saturday. “We’ll continue to draw samples until two consecutive days of sample result in showing the water is absent of bacteria,” Poteet explains. “Typically, we are able to rescind the BWN after the first rounds of sampling.”

This is the latest step in the city’s 10-month bridge project. “The project is proceeding as planned,” says Marco Island City Manager Roger Hernstadt.

The only glitch to date was the utility relocation, ran longer than anticipated due to material shortages and delivery of piping for the TECO gas line relocation. Hernstadt says this relocation had to be complete prior to the water main relocation, and it set the project schedule off by two weeks. He adds, though, “We are hopeful that the contractor may be able to make up the two weeks later within the project time line. Based on the latest schedule from the contractor, it appears that the work on the southbound bridge is approximately 20 percent complete.”

The next phase is the actual demolition of the existing southbound bridge structure including the piling in the center of the canal. This should take about seven days to complete, Hernstadt notes. Construction of the southbound bridge is scheduled for completion on February 25, 2015. Immediately after that date, traffic will be switched over, and work will begin on the northbound bridge.

With season — and its traffic snarls — quickly approaching, the city is bracing itself. “Traffic during season is always a concern of the city,” says Hernstadt. “We will try and inform residents and visitors of alternate routes to and from the south end of the island buy using message boards and public announcements.”

He also encourages Marco Islanders to sign up for the city’s Twitter feed — twitter.com/CityofMarcoISL — for timely information about the project and associated traffic delays.