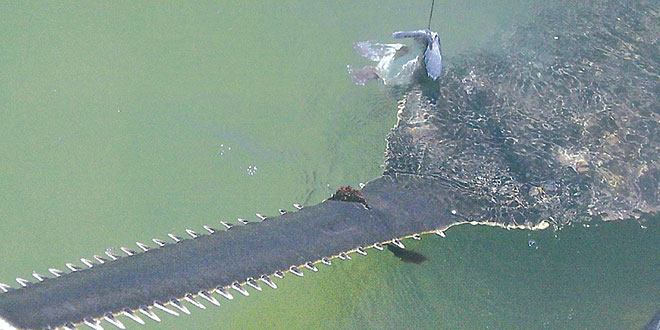 Marco Island boat captain Ted Naftal was quite surprised to see what was on the end of his fishing line after a four-hour fight on April 25 — a 16-foot, 600 lb. smalltooth sawfish.

This is the second such monster caught in Marco waters in the last two months. On March 7, Rookery Bay Reserve Fisheries Biologist Pat O’Donnell and his volunteers captured three endangered smalltooth sawfish (Pristis pectinata) in Fakahatchee Bay while out on their monthly shark monitoring and tagging program. The largest was a female measuring nearly 15 feet.

To report a sawfish sighting, e-mail the Florida Fish and Wildlife Conservation Commission at sawfish@MyFWC.com or call 941-255-7403. To file a report of a sawfish sighting or encounter, please include the date and time of the encounter, the location, the estimated length of each sawfish, the water depth and any other relevant details.