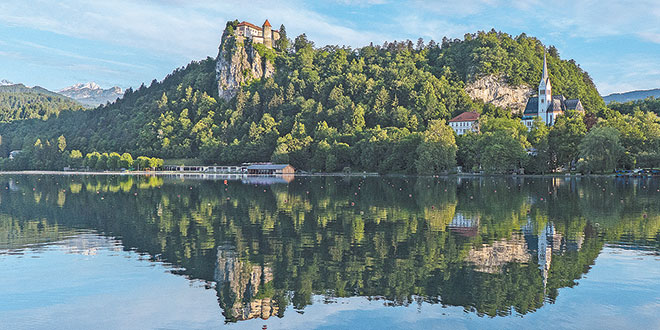 An early morning walk in Lake Bled is like walking into a fairy tale. PHOTOS BY VICKIE KELBER

Located at the northern end of the Adriatic, Slovenia has only 26 miles of coastline. While the Venetian/Mediterranean architecture of the coastal resorts is lovely, the real draw in Slovenia is the natural beauty found in its interior and the charm of the capital city, Ljubljana. Bordered by Austria, Italy, Hungary and Croatia, and slightly smaller than New Jersey, Slovenia boasts that it is the only country with “love” in its name. Unfortunately, people often confuse Slovenia with Slovakia, a country formed after the dissolution of Czechoslovakia or Slavonia, a region in eastern Croatia.

Part of the former Yugoslavia, Slovenia became independent in 1991. It fared far better than the other Yugoslav countries during this time of unrest as their war for independence against the Yugoslav People’s Army lasted only ten days. In 2004, Slovenia was the first former Yugoslavian country to enter the EU, and the first former Eastern European country given permission to use the euro after joining the EU.

Known as an alpine resort, slightly south of the alps, Lake Bled (“blade”) was our home base for exploring this country. Every guide books says it, and I just can’t avoid repeating; taking a sunrise walk around the lake with morning clouds caught in the surrounding hills and mountains, a church rising up out of an island in the lake, a swan family silently making its way across the lake and the first golden hues of the sun lighting up the castle overlooking the town is like walking into a fairy tale. Tito chose Lake Bled for his villa in Slovenia (he had one in each of the regions of Yugoslavia). The villa is now a hotel but allows non guests to enter to see the murals on the second floor representational of propaganda of the Communist era.

A three-and-a-half mile path circles the perimeter of the lake. At one end are resort hotels and a small town; at the other end is the modern Olympic rowing center. In addition to training Olympic athletes, Bled has hosted World Championships for rowing. Since becoming an independent nation, Slovenia has won frequent medals for this sport. For those who don’t want to walk the approximate hour-and-a-half hike, bikes can be rented at the Tourist Information Office and horse and carriage rides known as fijaker 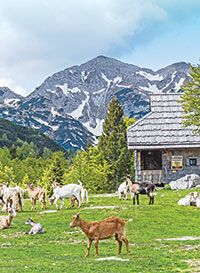 Lake Bohinj offers a panoramic view of the Julian Alps.

are also available. The snow capped peaks in the distance are the Julien Alps; Mount Triglav is the highest and has become a national symbol, present on the country’s coat of arms and flag.

On a small island in the lake is the Church of the Assumption. Legend has it that if you ring the bell located there your wishes will come true. Visitors can rent a boat to row to the island or take one of the many traditional pletna, or wooden boats manned by an oarsman.

Bled’s well maintained castle which dates back at least 1,000 years is well worth the climb for the view as well as its authenticity, reconstructed shops including a printing press dating to Gutenburg’s time, and museum. The walk up from the town takes about 20 to 30 minutes. One can also take a taxi or carriage, but there still is a bit of a climb to reach the castle. The day we were there, a medieval festival was going on with lots of performances and reenactments by costumed participants.

There is a very small old town and new town in Bled; both have good restaurant options; restaurants and cafes also spread out from the town along the shoreline. Bled is known for its krem‰nita, a light custard cream pastry. First allied with the Bavarians and the Franks, and later ruled by the Austro Hungarian Empire, Slovenian food is decidedly more “Germanic” than the rest of the former Yugoslavia, but there is a good mix of international influence in the cuisine and we even found a very good Chinese restaurant.

Local recreation outlets can organize a variety of outdoor activities in the vicinity including golfing, rafting and paragliding. For those choosing more sedentary recreation, there is also a casino.

Nearby is Vintgar, a mile long deep gorge through the rocks with paths and bridges over the thundering water and the largest waterfall in Slovenia. For something a little different, the town of Radovljica, 15 minutes away, has a very small but picturesque pedestrian medieval old town and beekeeping and gingerbread museums.

A popular day excursion from Lake Bled is to the Julian Alps. This affords the opportunity to not only enjoy the alpine vistas, but also visit the Soãa Valley (Isonzo in Italian), an important battle locale during World War I, and the 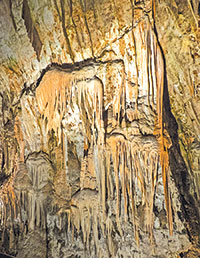 Postojna Caves is a popular tourist attraction in Slovenia.

area where Ernest Hemingway served and was injured. It was the inspiration for his A Farewell to Arms. More than 600,000 were killed here.

Lake Bohinj, less than an hour from Lake Bled, provides an opportunity for a closer look at the snowcapped alps without a long journey. Larger than Bled and located in Triglav National Park, Bohinj is the site of various boating and hiking opportunities, as well as a small ski area, Vogel. During what they call “green season,” the cable car and chair lift at Vogel afford visitors a panoramic view of the Julians. Near the cable car station is a World War I cemetery; some of the soldiers from the Soãa Front are buried here.

Slovenia is home to two massive caves, ·kocjan and Postojna. The former is a UNESCO World Heritage site, the latter more accessible and thus popular. Our travels brought us to Postojna which is the larger of the two. Indeed, Postojna was very busy with many tour groups, but it is well organized by entry time and language spoken. The first part of the deep, dark cave is traversed via an amusement ride type train, followed by a walking tour which includes some steep and slippery parts, and then a train to exit into a massive “Concert Hall” with a river raging below. The various shapes and colors of the stalactites and stalagmites that seem to go on and on are truly awesome, a word I don’t use lightly. Even my husband was impressed! The tour takes 90 minutes and jackets are necessary due to the constant below 50 degree temperature. The acoustics in the dark, dank, underground Concert Hall, which can hold 10,000 people, are so good concerts are held here on occasion. The claim is that photography is not permitted, but since nobody listens to that admonishment, the guides will usually tell their groups that only flash photography is forbidden.