Single and senior? The joys of traveling Down Under alone Part Two 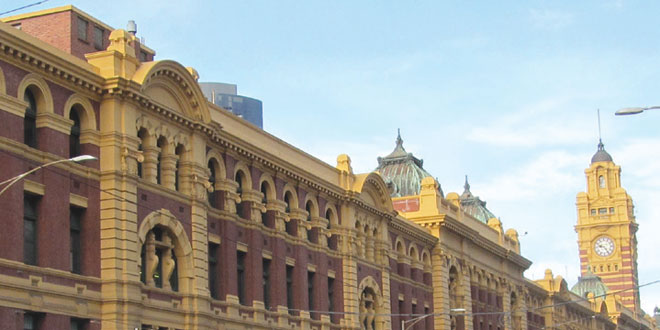 The weather turned quite brisk and the usual sunshine was lacking — I reminded myself that it is the beginning of their autumn. Adding a layer of clothing, I boarded the shuttle bus for downtown Wellington. As I looked around at skyscrapers and office buildings, I felt I could have been in almost any major city.

Following my map, on foot I eventually passed the Wellington City Museum and arrived at Te Papa – a beautifully designed, modern structure dedicated to the cultural origins of New Zealand. It was Sunday and a pleasure to see so many families with young children and grandparents, all enjoying a day’s outing together. Only the tourists and teenagers seemed attached to their electronic devices, taking advantage of the WiFi hotspot. Generally, WiFi is both slow and expensive and most people seem to know where to get free access and are shameless about parking themselves in those areas for hours.

Although half a day in the museum cannot possibly do it justice, the thought of making my way back to the shuttle bus in the damp, raw wind encouraged me to move in that direction. I made a few wrong turns and before I went in circles all day, a few very helpful natives soon had me on the right track. It was gratifying that all I had to do was look puzzled while holding a map, and within minutes passersby were offering travelers’ aide, and many even offered to walk with me.

The weather definitely became cooler and the sea a lot rougher, as we headed for the next port in New Zealand, the small town of Akaroa. Following the devastating earthquake in Christchurch, that city had been taken off the tour as much of it has not been rebuilt. I was sorry not to be able to see what I had heard was a lovely haven on a river, likened to the English cities of Oxford or Stratford.

Rocking and rolling on the sea, I watched the tenders that take the people from the ship to the dock when there is no facility large enough for the ship. I heard one of the crew comment that

Timaru, New Zealand, a sleepy town filled with bright flowers. People were preparing for the Cancer Society’s Relay for Life event by showing as much purple as they could. Submitted Photos

it was “questionable” and then they decided it was safe enough to go. Suddenly I felt no need to disembark that day, and settled down away from the chilly weather with a good book and some hot Italian coffee. This, to me, is one of the perfect pleasures of traveling alone: I don’t have to check it out with anyone, or excuse myself for not wanting to become a human milkshake — I can do whatever I want, whenever I want to do it.

The next day we docked at Timaru, NZ, another very tiny town. For me the best part was the view of the hills rising above the beach as the ship approached the dock. The town is quite small and easily seen on foot. There was not a lot of pedestrian traffic that day, but many friendly shopkeepers who were opening their doors and preparing for the day’s business. My general impression, again, was of being thrown back to a small 1950’s town where Kresge’s or Woolworth’s ruled the main street, and “the housedress” topped by pincurls and a large shopping bag accompanied housewives who went to the store on foot. By contrast, the ship felt even more luxurious.

The weather took a decided dip overnight as we cruised the Tasman Sea, with most passengers seeking indoor entertainment away from the grey, damp rain clouds. Early in the afternoon the captain announced that we were approaching the Fiords of Milford, and that the cruise director would be ‘on the air’ describing this fabulous view. We were all a bit skeptical as the most we could see through the grey mist and rain, was the hint of some darker cliffs rising on either side. Miraculously, the sun broke through to reveal a spectacular scene. If you have ever been overwhelmed by the scenery when cruising Glacier National Park in Alaska, Milford could easily come a close second or even tie for first place when it comes to majestic cliffs and mountains rising on each side, waterfalls carved into the steep walls, and some mountain tops still snow-covered. Peaks named The Mitre and The Elephant’s Head shot upwards as we sailed down 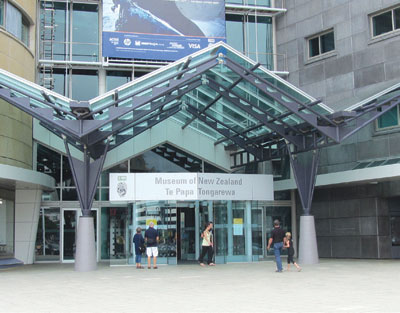 one way, turned at a wider area at the end of the Fiord, and slowly made our way to the entrance again. Afternoon tea was served on the decks, but for once the passengers seemed more interested in aiming their cameras in every direction than in feasting on sweets.

The next two days were spent ‘cruising’ the Tasman Sea, heading towards Hobart. Although I love being at sea and spend hours simply standing at the rail and watching it, I must admit I am not the best of sailors as I suffer from vertigo. I have tried many aids such as the acupuncture wrist bands without success, and have found that a mild dose of Meclazine usually keeps me on my feet and relaxed. (The Tasman Sea probably rivals my trip through Cape Hatteras many years ago, on a much smaller ship without stabilizers: rock ‘n roll, with waves approximately 15 feet high.) Halfway to our destination the Captain announced that one of the passengers required medical aid quickly and he would be accelerating our arrival time in Hobart by 12 hours. Putting an end to the shaking and shuddering more quickly didn’t upset anyone too much, and as we pulled into the port we were treated to the first of Australian hospitality when the customs officers greeted us aboard the ship, individually with our passports. Both Australia and New Zealand have extremely strict laws about not bringing any foods, as well as plants into the country. We were warned repeatedly to leave all food on the ship. In each port in Australia, it is not unusual to be met by the cutest little dogs whose masters allow them to sniff you, your packages, and your handbags and backpacks. A forgotten apple or sandwich can detain you indefinitely.

I had read about Hobart’s weekend Salamanca Market and was eager to see it. Our Friday night arrival made it possible to visit the Market and although Saturday dawned rather gloomy, I added a big, ugly but functional slicker to my backpack and headed ashore. I have seen many flea markets, but I was little prepared, until I saw it, for both the size and 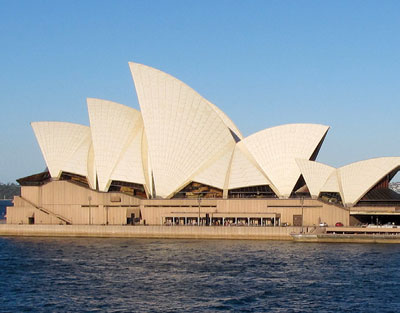 The Sydney Opera House, opened in 1973, has become an Australian icon.

the quality of the Salamanca. It was vast. After five hours of walking through the Market, I was almost relieved when the soft damp mist turned to pouring rain and I was forced to head back to the ship. First of all, the scent of greasy fried food permeates the air, so I was able to resist the array of foods representing many cultures. I was particularly attracted to the many examples of wood carvings, home-woven merino wools and the finished clothing made from the wool. In spite of the weather the market was crammed with people – mainly families with lots of kids, prams, and wheelchairs. In both Australia and New Zealand it was heartwarming to see that a family day out seemed to include everyone, however able they might be to negotiate the crowds.

Our next port was Melbourne, and I was unprepared again for the approaching view of a skyline that could have signaled our arrival in Toronto, Chicago or New York. Of course Melbourne’s beautiful expanse of sandy beach running from one end to the other, crammed with sailboats (and, I later learned, jelly fish) with its gracefully modern skyscrapers rising behind it make it unique among the big cities of the world.

As the shuttle bus from the ship carried us through what must be an older part of the city, I saw evidence of the many cultures in the kind of restaurants we passed and the names on many of the shops. It was Sunday so I didn’t expect to see much business — I was wrong again. The downtown area was packed with people. It was about 30 degrees warmer than New Zealand and everyone seemed to have taken to the streets or the beaches to enjoy it. As I walked through the crowded streets studying the shops that were open, I felt a distinctive ‘Times Square’ atmosphere about the place. Also in evidence were many Gothic-looking buildings and the enormous Flinders Street train station. After many hours of walking and exploring, I hopped aboard a tram and rested my weary bones as I headed back to late lunch on the ship.

After another day at sea, 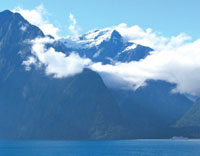 Straits of Milford, New Zealand, where at the end of summer there is still snow on the peaks.

Sydney harbor came into view. You may not have been to Sydney, but you may be familiar with the unique opera house which is located on its Circular Harbor, where the large ships dock. Although the building is now 40 years old it is as impressive as when it was first built, looking like a gigantic ship about to set sail. The ship’s pier is located right at an area of the city known as The Rocks, and stepping off the ship you find yourself only a few paces from an art gallery, the ferry service, and many shops and pubs.

I had another reason for being so excited about being there: for many years I have been corresponding by e-mail with a woman I had never met in person, who lives near Sydney. We seemed to share a lot of interests in similar crafts and had connected on one of those Internet sites. When I told her I was going to be in Australia, she had offered to spend the day with me in Sydney and had supplied a few options on how and where we could meet, and what to do if that failed.

Fortunately, it was as easy as walking off the boat, and finding a friendly face sitting on a bench! We spent an absolutely delightful day wandering around that area, ending it with a 5-hour pub lunch. We had assumed we would not be short of conversation (understatement of the year) and I am sure we could still be talking — although we are now once again resorting to e-mail. It was the perfect ending to the trip, which culminated in a rather uneventful flight home the next day.

Loaded with wonderful memories and hundreds of photos to go with them, I still look back in amazement that I actually survived a trip like this on my own. I would definitely consider another trip to Australia, now that I have had ‘a taste’ and would like to make Sydney a base for one month and make short trips from there. Now where did I put that lottery ticket!

None of the places mentioned or Oceania Cruise Lines has contributed in any way financially to this trip.