Signs they are a changin’ 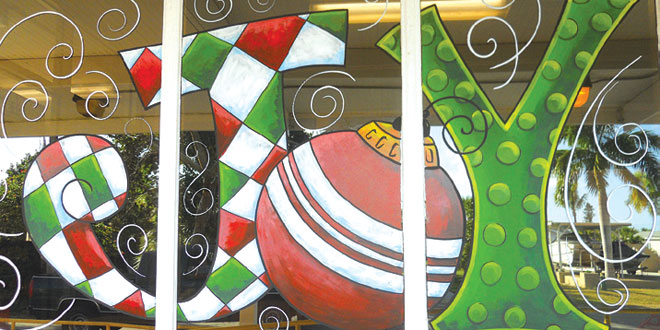 Denise Santos of Goodland painted the post office window to help the village get into the holiday spirit. Photo by Joanie Fuller

The signs are all around us. Season is here and a change is in the air. Not only can we feel it, but we can see it too. Especially in Goodland. Take a trip down our long and winding road and see for yourself what I’m talking about.

Many have noticed that the sign at the entrance of Goodland has gone missing. The hand-carved and hand-painted piece or art was taken down as a part of a restoration effort between the Goodland Civic Association and the newly formed Goodland Arts Alliance. The sign was in desperate need of a paint job and the GAA agreed to lend its artistic hand. Members of the GCA removed the large sign and and helped to pressure wash it and sand it. It is now in the process of being hand-painted by a number artists from the GAA. It should be returned to its home on the triangle before the Mullet Festival in late January. 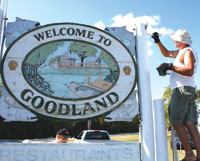 Greg Bellow and “Giz” paint the pylons before removing the sign for restoration.

the first joint effort between the GCA and GAA and the results so far have been truly magnificent. Both organizations have expressed enthusiasm about the different ways in which the community has been coming together. Maybe it’s all the caffeine, but I’m sure buzzing with excitement.

Another sign of change can be seen at MarGood Park. Standing ten feet tall and not too far from the MarGood Museum, a brand new sign has been erected explaining the significance of MarGood and its historical and cultural value. The sign states that MarGood Harbor Park was purchased in 2005 using Florida Forever Funds.

And now for a somewhat politically motivated aside: The state program, which began in 2001, succeeding the Preservation 2000 Act which began in 1990, was receiving $300 million annually to purchase land of historic and environmental value. Because of MarGood’s historical value as both a Calusa Indian mound and historic fishing village, it was purchased in 2005 via this funding.

In 2008, under Rick Scott’s legislation, Florida Forever funding was

cut to only $15 million annually. In the years since, the monies allocated have become even fewer. If you are interested in learning how you can help reallocate this funding back to the purchase of sensitive lands, visit floridawaterandlandlegacy.org.

And now, back to the sign. It is certainly a symbol of the changes going on at MarGood. From the installation of a volleyball net over the summer to reopening the MarGood Museum to plans for future utilization of the park by the Goodland Arts Alliance, the county has certainly been working on beautifying the park.

With such positive changes, the painted sign on the post office window by Denise Santos says it all: JOY!

From signs to stars. Every year around the holidays, visitors to Goodland comment on the shiny silver stars that line the curvy road that winds into our village. A tradition that started many moons ago honors loved ones that have passed. People are encouraged to pick a star and write their loved one’s name on it. When 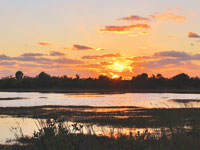 Celeste Navara’s 2013 calendars ofGoodland feature beautiful photos such as this shot of sunset on Goodland. Photo by Celeste Navara

the stars appear, it’s a sign to all of us that the holidays are near. It’s also a reminder to remember those we have lost and to love the ones we have.

For those who need a daily reminder on the importance of love, photographer Celeste Navara has created the perfect solution. Just in time for the new year, Celeste has designed a calendar entitled, “Our Beautiful World.” Her photographs of Goodland in all it’s splendor are visual reminders of how lucky we are to live here. When I received mine as a gift, it only made me love our little island that much more. Celeste’s calendars can be purchased at Blue Mangrove Gallery on Marco Island,1089 N Collier Blvd. #417, 239-393-2405. To purchase them directly, contact Celeste at cnblusky@yahoo.com or 239-394-9298.

Natalie Strom has lived in Goodland for over two years and has worked in Goodland on and off for more than five years. She is a graduate of the University of Iowa and is also a former Buzzard Queen of Stan’s Idle Hour in Goodland.