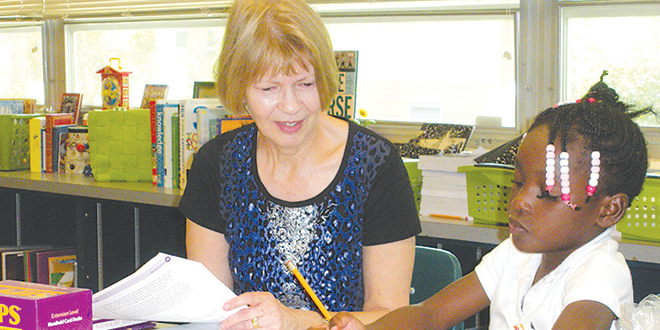 First grader Celine Eldira was a study in concentration as she examined a worksheet containing spelling exercises. Sitting by her side and offering support was her mentor, Rae Chamberlain, of Marco. “The next sentence is ‘Pick up the socks,’ she told Celine. “Remember what we learned today and how to get the ‘K’ sound.” With that prompting, the youngster with multicolored beads adorning her neat plaits spelled every word correctly. A 1,000-watt smile spread across Celine’ face when Chamberlain exclaimed, “Absolutely perfect. You get a star.” Similar after-school scenes were playing out elsewhere that afternoon in the Manatee Elementary School classroom as part of the YMCA Reads program of the Greater Marco Family YMCA. Y Reads is a literacy improvement program for children in kindergarten through third grade that is a partnership between the Florida Alliance of YMCAs, the state’s Department of Education, the Volunteer Florida Foundation and participating schools, parents and community members. The highly structured program is taught by trained mentors, under the supervision of a full-time coordinator, with each child’s progress carefully monitored. In Collier County, Parkside and Avalon elementary schools in East Naples have joined Manatee as Y Reads sites this school year, said Daisy Galarza, who coordinates the program for the Marco Y. She said the addition of those schools has created a dire need for at least 12 more mentors to serve the 137 youths in the program and enable a 12-student waiting list to be eliminated. “This is a program that’s driven by volunteers and all we ask is that you have the calling, that it’s in your heart,” said Galarza. “If it’s in your heart, the rest falls into place.” Y Reads regulations call for a ratio of one mentor for a maximum of three students, but a ratio of one-to-two or one-toone would be preferable, said Galarza. “We still have to see the kids even though we don’t have enough volunteers,” she added. “So we urge everyone who is willing and able to come and give us a hand.” Mentors must be at least 21 years old and a background in education is not required. To take part, an application must be submitted for the Y and the Collier County school district for approval and successful
applicants also have to be fingerprinted. “The commitment is two hours (a day),” said Galarza. “If they can commit to two days a week, that would be very helpful. But if they can commit to 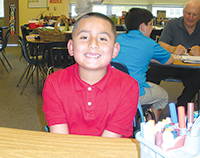 Second grader Saul Castillo says Y Reads has helped him immensely during his three years in the program.

only one day, that’s OK.” A mentor for five years, Chamberlain has seen the difference the assistance can make for the youngsters. “This is a fabulous program,” said Chamberlain, a retired federal judge. “Children who are having difficulty can get a step up in how to read better, in how to blend consonants to figure out words. When you see a child go from not being able to read the alphabet at all or even recognize a letter, going on to become someone who is now above grade level in reading, it warms your heart,” she added. Chamberlain especially encouraged men to consider becoming mentors because boys in the program seem to appreciate interacting with an adult male in that setting. “Y Reads is important to me because it is only by reading that a child can succeed in life,” she added. “Parents of many of the children either do not speak English well or are so busy working that they do not have time to read to their children. That’s one of things we do and when the child reads to us, he or she is so proud. At this age, they are sponges and are eager to learn. This won’t last long, so the Y Reads program is essential.” Second grader Saul Castillo said the program has helped immensely with his school work. It’s also turned him into a reading enthusiast. “Sometimes, when I get mixed up with some of the words, the program has them and I practice and when I practice with the program, I get better at reading,” he added. Saul’s mother, Erica Adame, said he is a fan of both Y Reads and “Miss Daisy. I absolutely love it,” she added. “It’s benefitted my son, by far. He’s been in the program since kindergarten and it’s really made a difference.” Assessments such as Saul’s and his mother’s are music to Galarza’s ears. “I would like everyone to know that we are a unique program and that we are making a difference,” she said. “I know we’re making a difference.” For information about the Y Reads program or to apply to become a mentor, visit www.marcoislandymca.org/index. php?option=com_content&view=article&i d=143&Itemid=53. Additional information can be obtained by contacting Galarza at 394- 9622, ext. 275 or via email at yreads@ marcoislandymca.org. In addition, to help the Greater Marco Family YMCA in its mission to erect a Youth Development Center in time for the start of the next school year, visit www.greatermarcoy.org/index.php/en/.