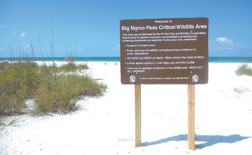 Beachgoers should be mindful of designated wildlife areas.

The City of Marco Island is part of the Florida Shorebird Alliance, a partnership that includes Florida Fish & Wildlife Conservation Commission (FWC), City of Naples, Collier County Government and Sheriff’s Office, Rookery Bay National Estuarine Research Reserve (RBNERR), Sea Grant, the Conservancy of SW FL, Inc., Friends of Tigertail and Collier Audubon Society. The goal of this Alliance is to support those entities involved with volunteer management, materials and information to improve public outreach and education, while monitoring and protecting resting and nesting shorebird populations. Due to smaller staffs and budgets in all entities, the Alliance is an economic and reasonable way to continue shorebird conservation efforts throughout Collier County.

Marco Island’s Sand Dollar Island and Tigertail Beach Lagoon ecosystem is one of the most important habitats in the world for shorebirds – both wintering and nesting species. In the fall and winter months, migrating shorebirds use this area as a resting and feeding site as they migrate from as far away as the Arctic Circle heading to South America. In spring, this area is vital for nesting shorebirds. For many years now, Marco Island has four of the seven most important nesting areas in Collier County for the federally listed and protected shorebirds, Least Terns, Black Skimmers, Wilson Plover and Snowy Plover. Three of the sites are monitored and managed solely by FWC due to their state designation as Critical Wildlife Areas (CWA) located on Sand Dollar Island, called the Big Marco Pass CWA. The fourth area, which in the past two of three nesting seasons, has become the largest nesting site for Least Terns and Black Skimmers, is located outside of the Big Marco Pass CWA and on the main beach of Marco Island, typically located between Beach Monuments R-138 and R139 (on the beach adjacent to the South Seas Condominiums, south of the Tigertail Beach Lagoon).

Black Skimmers and Least Terns nest in flocks and need open, un-vegetated sandy areas. Their nests are scratches in the sand. They typically have two or three eggs per nesting pair. Wilson Plovers nest as individual pairs, not in flocks, hiding their nests in the dune or vegetation edges of the beach. (Snowy Plovers will nest in small flocks, but this species has not been observed on the Marco Island beaches for a few seasons now.) These species are listed by the federal government and the state as protected. Their nests, eggs and young are fragile and hard to see in the sandscape of the beach. Posting the areas for protection is part of the conservation management to ensure the species continue to produce young and to thrive.

This season, the Big Marco Pass CWA, will be posted the first week of April. Due to changes in the 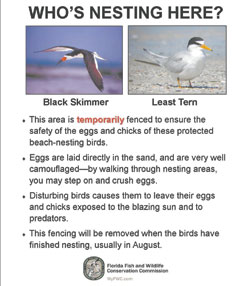 Sand Dollar Island environment, the posted areas will be determined by FWC. Many changes to the CWA have occurred since last nesting season. Sand Dollar Island beach, which is really a spit of sand attached to Marco Island’s main beach, has become thinner due to vegetation growth and some erosion. Also, a breach was formed in July last summer and has stayed stable on the Sand Dollar Island spit, creating an “island” to the north of Sand Dollar. The breach area is wide, deep and has strong currents. Any bird monitoring in that area will be done by boat. As the shorebird season progresses, it will be interesting to see where the birds can and will “set up” to nest. It will not be surprising that the posted areas could change over the season, as the shorebirds find the right area to nest.

The Marco Island beach area will be posted in late April this year. Last shorebird nesting season, the area was pre-posted, and only a few Black Skimmers and Least Terns nested in the area. This may be due to how wet this area of beach has been in the summer months. With regular rains this past summer, the low, wide, large beach in front of the South Seas Condominiums holds water. The water does not percolate quickly in this area, creating wet sand and areas of standing water. The nesting birds need well drained, dry sands for their nests and chicks and were more attracted to the open, sand areas of the Big Marco Pass CWA. Consequently, this area will be pre-posted as a smaller area and closer to the actual beach. If and when Black Skimmers and/or Least Terns do nest in the area, the posted area will be changed to protect the area of nesting.

Posted areas are temporary, and remain between mid-April through late August, the typical shorebird nesting season. If grasses or vegetation grow during the posting period, it will be removed by the rake operation after the nesting season, restoring this area of beach to the original condition. Posting a nesting area is required by federal and state rules (Endangered Species Act and Migratory Bird Act) and consists of posts, string, flagging and signage. Volunteers, Shorebird Stewards, spend time near a posted area to provide informational handouts, answer any questions from beach goers and provide an opportunity to view the birds’ behaviors and just hatched chicks through a scope. Some volunteers are trained to count and monitor the nesting shorebirds. Data is provided to FWC for future conservation management plans and practices.

For any additional information or if interested in volunteering, please contact Nancy Richie, Environmental Specialist, City of Marco Island at 239-389-5003 or nrichie@cityofmarcoisland.com