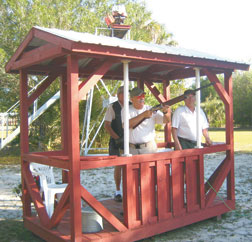 Glen Shirley takes a shot as the clay shoot behind him fires.

The Port of the Islands Gun Club is hosting the second annual clay shoot to benefit the Greater Marco Island Chapter of the American Cancer Society. One hundred percent of the proceeds from the March 31st event will go towards the ACS’s R.O.C.K. program, Reaching Out To Cancer Kids. So grab your rifle and head down to the Gun Club and help “Shoot Down Kid’s Cancer.”

According to Landis, about 50 shooters are currently expected to show up for the fundraising event. The R.O.C.K. program is made up of three parts. Landis, who currently serves on the Marco ACS Board of Directors, explains, “one part is sending kids with cancer to summer camp. The second part is that it provides partial scholarships to college kids.” R.O.C.K. also sponsors a weekend at Disney World for cancer kids and their families. Last year Marco’s ACS Branch was able to send six kids to Boggy Creek Summer Camp, a camp started in 1976 that provides special treatment and a safe environment for kids with cancer. Five scholarships were also awarded via Marco’s organization. “There 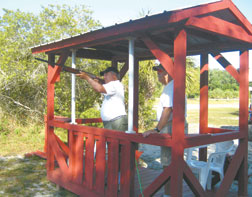 are many other events that raise money for R.O.C.K. in the area, so it all goes into the same pot.

So (our event last year) shared in that. The clay shoot gives 100% of its proceeds to the R.O.C.K. program,” adds Landis.

During the event, teams of four will shoot over 100 clay targets at 14 different stations. Individuals can pay $250 to participate and will be placed in a team. To sponsor a team of four costs $1,000. This includes the two-hour shooting event, cocktail hour, catered lunch and silent and live auctions.

Last year’s teams boasted Gun Club members, individual participants and corporate-sponsored teams. Landis’ team, Insurance Solutions, won the event last year and will be participating again this year. Don Henderson, brainchild of the fundraiser, has named his team “Miss Em Quick.” The tourney is not just for men. Ladies are more than welcome to take place in this exciting event. One of the all-female teams competing this year is known as the “Swamp Divas.”

Registration for the shoot-out begins at 9:00 AM. Refreshments and light food will be provided as teams show up and sign in. At 10:00 the shoot will begin. Each team will make its way around the 14 stations, which should take about two hours. Awards are given to the top two teams. Landis explains, “this is not a professional tournament, it’s a tournament to raise money, so we don’t really publish the scores.

The Port of the Islands Gun Club is off the beaten track, on the north side of US-41. PHOTOS BY NATALIE STROM/COASTAL BREEZE NEWS

“After the shoot we will have a cocktail hour along with a silent auction,” he adds. Salon products for the ladies will be up for silent auction, along with wildlife paintings, gift certificates from restaurants such as The Little Bar in Goodland and free one-year SeaTow memberships.

Lunch will then be provided by Porky’s Last Stand of Marco Island. Winners of the silent auction will be announced at this time.

Following lunch a live auction will take place. “We have some exciting things for the live auction,” explains Landis, “we have a couple of shotguns up for bid, which makes sense. One of our live auction items involves taking off and landing in an airplane on a U.S. Navy Aircraft Carrier. We also have wine trips to Sonoma up for auction.”

The fundraising event should come to a close around 2:30 in the afternoon. Those involved are hoping to break the enormous record set last year of $24,000. All are encouraged to sign up for this fun day of shooting, shouting and saving children’s lives. To take part in the clay shoot, call the Greater Marco Island Unit of the American Cancer Society at 239-642-8800 or call Gary Landis at 239-394-2080.

To learn more about renting rifles for the event or to find out about all the Port of Islands Gun Club has to offer, call 239-642-8999 or visit www.poigunclub.com