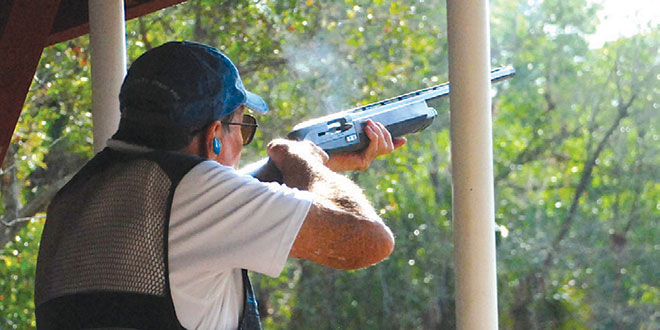 About five years ago, Don Henderson and Gary Landis were brainstorming ideas for fundraisers for the American Cancer Society-Marco Island. Henderson came up with the idea, and Landis agreed. Both men were survivors of prostate cancer, and Henderson’s family had a history with the dreaded disease.

“Don and I are avid sporting clay shooters,” explains Landis. “We meet people along the 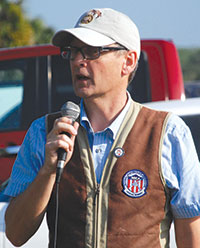 way and expose them to our event. Many of them are real, dyed-in-the-wool sporting clay shooters.” Landis also credits D.J. Gasaway, the former owner of Port of the Islands Gun Club (now Gulf Coast Clays), and Ken Moss, who were instrumental in organizing the event. 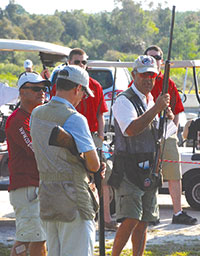 Through registration fees, sponsorships and auction items $28,000 was raised for ACS-Marco Island. Among the hot commodities being auction off were a new shotgun, four tickets to a Miami Dolphins game and two footballs autographed by Tannehill and Fasano.

This brings Shoot Down Kids Cancer four-year total to $108,000 raised. The reason for the success of the event is simple: Target shooting has grown in popularity in recent years. In fact, according to the National Shooting Sports Foundation, more Americans target shoot each year than the total population of the state of Florida. Further, the nation’s target shooters spend $9.9 billion annually on their sport. That is more than the annual revenue of the NFL.

This growth also is why Colin Burrows — a British television production executive and shooting enthusiast — bought Gulf Coast Clays at the end of December. The 50-acre facility on the edge of the Everglades encompasses 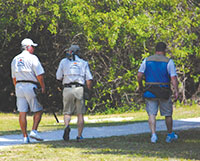 Members of Paradise Gun Club stroll to their next shooting station.

Trap, Skeet, Sporting and Five Stand clay shooting opportunities. Burrows was on hand at Shoot Down Kids Cancer to provide a $500 check to ACS-Marco Island and to make certain all shooters remembered that “safety is the most important thing.”

The highest score of the day went to Toby Muir with a 98, and the group from Nissan took the team event, followed by Paradise Gun Club in second place and the Stanley Steemer team in third. Team members from Nissan included John Wilk (team captain), Brian Jones, Bill Scarborough and Glen Shirley.

With the echoes of this year’s shoot still fading, Landis says his group already has plans for the fifth anniversary event underway. Among the new ideas is auctioning a custom-made shotgun from Cole Gunsmithing and expanding the list of silent auction items. Organizers also are looking to focus on the upcoming mid-term elections with a political discussion at the event. “We are learning as we go,” says Landis.