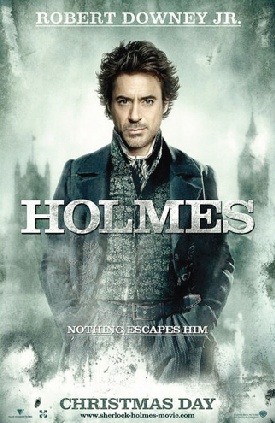 This isn’t your old edition of The Adventures of Sherlock Holmes by Sir Arthur Conan Doyle. This is 1890s London, and a 21st century Holmes and Watson as never before read or seen. Gone is Basil Rathbone,  the urbane, suave Holmes and his deerstalker hat. Gone, too, is Nigel Bruce, the bumbling, fumbling, avuncular Dr. Watson.  But perhaps we’ve come full circle, for it was Watson who nearly died while serving in Afghanistan.

The transition, by Director Guy Ritchie, is neatly done.  London is sleazy, filthy, overrun with unfinished monster projects, including the Tower Bridge, rats, and lots of people with very bad teeth. The photography is dark, foreboding and altogether beautiful. The directing is taut and imaginative.  The ‘modern’ Holmes, played to perfection by Robert Downey, Jr., uses cocaine (as in Doyle’s first adventure), and is a brawler, not an ascetic. He fools with his violin, tries various knockout chemicals on his bulldog and gets involved in bare-knuckle fights. His fight-scenes are not only choreographed, but also use slow motion to develop Sherlock’s strategy for punching out the monster on the other side, and then repeat the steps in real time. The effect is terrific. Holmes continues to use his immense powers of inductive reasoning to know everything about everybody.

Jude Law, as a fairly young, virile, amusing, highly intelligent Dr. John Watson, has a role made for him. Law plays off beautifully opposite Downey, and there’s a lot of humor in the interchanges between the two. Watson is adept with the sword-can, but a clumsy shooter with his pistol.

Sherlock’s sort-of girl friend, Irene Adler, is portrayed by Rachel McAdams with the right touches of comedy and sexiness.

The plot transitions to the 21st century with a mad villain, Lord Blackpool (Mark Strong), determined to take over the world, or at least the colonies.  The movie briefly shows Sherlock’s nemesis, a shadowy Professor Moriarty, implying that there will be a sequel. Pity that we never get to meet Mycroft, Sherlock’s seven-year older, wiser brother, who spends most of his time thinking great thoughts in London’s Diogenes Club.

The movie tends to be a bit overwrought and overwhelmed with modern times machines. It is more than redeemed by the acting, photography, and humorous touches.

Marco Movies where Sherlock Holmes has been running, is the innovative theater featuring first-run movies, comfortable swivel seats, tables as well as theater seating, and food served at one’s seat.  The theater will be running a steady stream of new features beginning in February.

Attorney Lazarus is currently on Marco Island’s Planning Board but escapes frequently to enjoy and report on movies.