Shark Fishing for the Soul 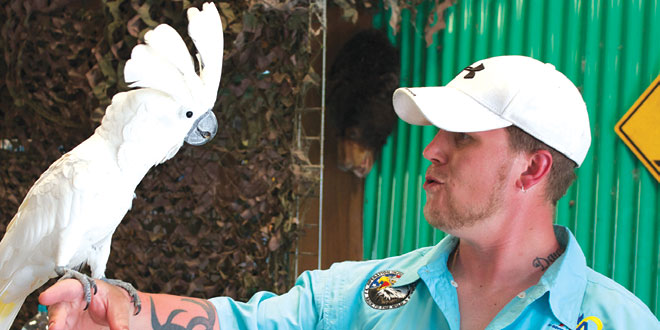 Sometimes scars aren’t always visible. Just because someone has been injured doesn’t mean it’s going to show. TBI or Traumatic Brain Injury is one such hidden scar – or PTSD. Some scars can be seen, like the loss of a limb or a slice down the center of one’s stomach in order to put them back together. Regardless of the type of scar, it stays with you – and you have to choose how you’re going to deal with it.

For soldiers of any war, these types of scars are all too common – be they seen or unseen. Operation Injured Soldiers (OIS) is a national organization, based out of Michigan with its goal being “to help our wounded heroes get back to doing the sports and hobbies they enjoyed before being deployed,” according to its website. 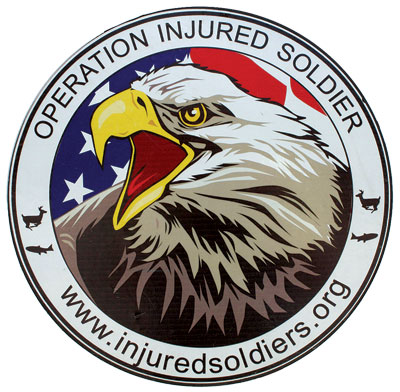 there are more than two million disabled veterans in the United States today – many who have been severely injured. This number does not consider those suffering from PTSD.

Chris Abrams moved to the Marco area due to his love of fishing and the beauty of the island in 2007, yet he barely leaves the house. A veteran of the war in Afghanistan, Abrams served in 2005 and 2006 and was honorably discharged in 2007. Due to scars unseen, Abrams was discharged under disability. In his late 20’s, Abrams can no longer work. He has a service dog that helps him deal with many of his issues and a loving family. “I have a good life,” he states. We’re happy. I live in a beautiful house, I have my wife; I have my son and we live on a beautiful island.”

Abrams also has his uncle, a military veteran himself, who helped Abrams break out of his shell 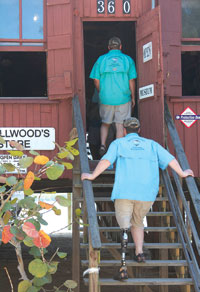 A visit to the Smallwood Store. Photos by Natalie Strom

a bit and introduced him to OIS. “When you’re out there (on the battlefield), you’re constantly running on adrenaline all the time,” explains Abrams. “You have to be. You never know what’s going to happen next. And then you come home and everything’s different. You don’t know how to transition and deal with the loss of the need for that adrenaline. Regular civilians just don’t understand what it’s like.”

OIS tries to bring that adrenaline back through hunting, sporting, fishing, camping and other recreational events for any veteran injured in any way during any war. In 2008, Abrams, along with his uncle, traveled to Michigan for the “Muskie Meet,” fully sponsored by the Michigan Ontario Muskie Club and the Detroit Yacht Club, where about 30 large yachts took out OIS veterans to fish for muskie.

Abrams was allowed to bring his uncle because, “I was just coming 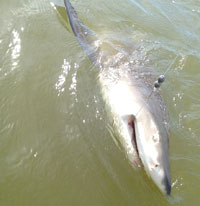 out and I was afraid to go alone, so they said if I had a family member who was a veteran I could bring them. My uncle has helped me through some pretty dark times.”

Those dark times are slowly fading for Abrams as he’s found a way here in Florida to get the adrenaline rush he needs while helping other injured veterans at the same time.

After an exhilarating experience shark fishing with his uncle off of Marco, Abrams decided an OIS Shark Fishing Trip would fit in perfectly with the program. And OIS said yes.

The 501(c)3 is completely volunteer-based. This means Chris is a volunteer as well as all the other guides and board members. All the support comes from charitable donations and sponsors like American Airlines, which graciously sponsors flights for the trips.

Abrams was given a $10,000 budget for one year meaning he would have to search out more sponsors and volunteers to help bring 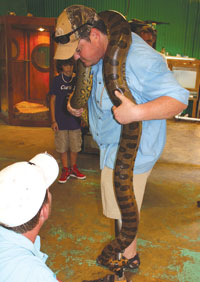 This veteran with a sense of humor wanted nothing more than to rap a Burmese Python around his prosthetic leg. He got his wish.

the Marco Island Shark Fishing adventure to fruition. “I don’t get the rush of catching a shark anymore,” he says. “I get the rush from watching the other guys catch them.” He hopes to be able to soon host one trip every month.

Veterans come for the weekend spending one day shark fishing, one day on an Everglades tour and one day backwater fishing. On a recent trip held the weekend of April 13th, one of the veterans explained how the trips create immediate camaraderie. The trips consist of anywhere from two to nine vets who, for the most part, have never met, yet being a part of that same military background, they almost immediately become like brothers and/or sisters. This particular group was all men and they laughed and joked with each other as if they’d been pals their whole lives.

Some even joked about their injuries. One vet who lost his left leg showed off his 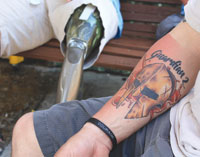 The Guardian tattoo represents this soldier’s squadron, while his “Courage” wristband is fitting given the scenery in the background

t-shirt of a gingerbread man with its leg broken off, the t-shirt stating, “Oh, snap!” On a previous trip, Abrams told the story about how one man with a prosthetic leg wanted to take a picture of the shark he caught biting it.

Asked if they would take their time served back if they could, the unanimous response was a surprisingly loud and adamant, “NO.” These men are proud; they are heroes; and  they are wounded – doing the best they can to move on with their lives after they have been so deeply scarred.

And it doesn’t stop. “We’re starting to become forgotten about,” states Abrams. This isn’t about me; people don’t need to worry about one vet. They need to worry about the hundreds coming home every day. They deserve the respect that the soldiers who first came home from these wars received.” These soldiers will also face a lot of the same injuries that those 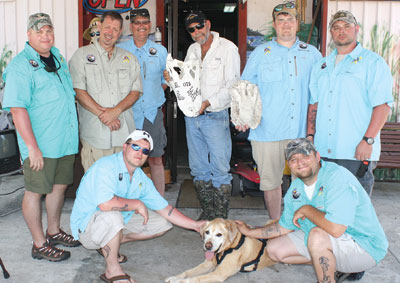 The gang. Chris Abrams sits at the bottom right. Mambo, the service dog in the photo is actually a retired veteran as well. Many of the men have service dogs.

veterans already home are dealing with.

Through OIS, Abrams hopes to help give his fellow soldiers that respect and also help them recover in the process. Many local businesses have also helped Abrams. The Boat House Hotel in Olde Marco is where the veterans stay every time, with the owners graciously donating their rooms. American Airboat Tours of Goodland gives them a free ride, The Skunk Ape Research Center in Ochopee lets them experience gators, and exotic snakes and birds, often offering the vets a free t-shirt and a talk about the elusive Big Foot of the Everglades. Fishing charter captains Dan Fabian, Hector Diaz and Chris DeWitt of Big Shark Fishing often donate their time, taking the vets out on the fishing adventures.

The trips are completely free to the veterans and sponsorship is always appreciated. To learn more about the Operation Injured Soldiers program, visit www.injuredsoldiers.org. To discuss sponsorship options to help Abrams accomplish his goal of one trip per month, give him a call at 239-300-8355.