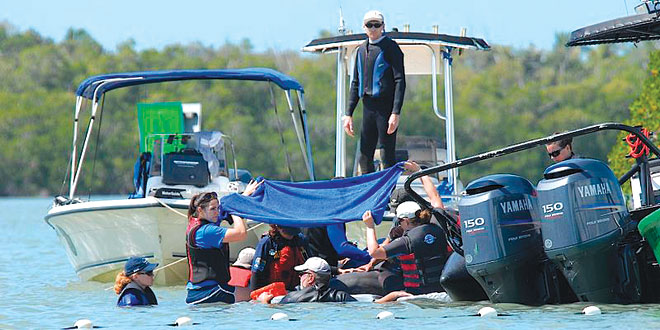 The tale of Seymour, one of Marco Island’s resident dolphins, is making waves across the country. In December of 2011, the Dolphin Explorer sightseeing vessel spotted Seymour with fishing wire wrapped around his peduncle, or the area just above his tail. A message went out to locals requesting call-ins whenever Seymour was seen. Thanks to the watchful eye of Marco residents, the impressive rescue and recovery efforts caught the attention of ABC’s Saturday morning program “Sea Rescue.” Hosted by Sam Champion of “Good Morning America,” Seymour’s story will air on April 26, 2014.

Viewers around the country will soon have the chance to see what many here witnessed two years ago. However, Seymour’s story really began at his birth. In 2006, Captain Chris Desmond and his crew developed The 10,000 Islands Dolphin Study. Desmond, along with Kent Morse, James Livaccari and Kristen Froelich, utilize the Dolphin Explorer to track the abundance, distribution, movement, association patterns and behaviors of the local bottlenose dolphin community. Those who take a ride on the boat that leaves out of the Rose River Marina daily have a chance to participate by pointing out dolphins, helping the crew determine what dolphin they’ve seen and what type of behavior

Seymour’s injury was incredibly obvious even at a distance. SUBMITTED PHOTOS

To date, the study has identified more than 200 local dolphins by their dorsal fins as every one is different — just like a human fingerprint. As one of the first dolphins spotted by The 10,000 Islands Dolphin Project, Seymour, just a calf at the time, was given his name as the crew continued to “see more” of him on their excursions.

They certainly did. He has been described by the crew as having his own “dolphinality”, which made him easy to identify when the crew was on the water. Thus, it was easy to notice the dramatic change in Seymour’s behavior when his injury was first spotted on Dec. 10, 2011. It was subsequently reported to NOAA’s National Marine Fisheries Services, which regulates marine mammal rescue. On Dec. 21, 2011, a panel determined Seymour’s injury was life-threatening and approved a rescue intervention attempt.

The more Seymour was spotted, the more likely a professional crew would come and perform a rescue. The call went out to locals in early February 2012 as the Dolphin Explorer needed more eyes on the water. 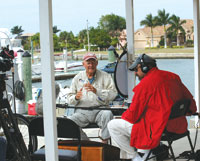 Captain Chris Desmond is interviewed by the crew of “Sea Rescue.” PHOTO BY PATTY WEBB

Oceanographic Institute, the Chicago Zoological Society, Mote Marine Lab, the Florida Fish and Wildlife Conservation Commission and the University of Florida gathered on Marco Island and set out on the water to find Seymour.

“It took 15 seconds to set the net. All of a sudden these boats just whipped around in a circle and then they came to a complete stop and the net formed a perfect circle around him. Within a minute, they were there working on him,” explained Kent Morse. “When they were working on him they commented that he seemed compromised. That he seemed somewhat malnourished. So they got him at a good time.”

The fishing line was quickly removed, and Seymour’s overall health was assessed. Blood was drawn, a device was placed into his blow hole to check for disease, and x-rays were taken to determine bone damage. A monitoring device was attached to his dorsal fin so he can now be monitored at all times.

Throughout the entire experience, students at Crafton Elementary School in Pittsburgh followed the story through an interactive environmental studies program developed by Desmond and Crafton school teacher Susan Kosko.

After a visit to Marco Island, Kosko and Desmond created the program for Kosko’s intermediate reading students.

Seymour’s siblings, Simon and Kaya, rolled right up to the side of the Dolphin Explorer boat, showing off for the cameras. PHOTOS BY NATALIE STROM

They began reading the children’s version of “A Dolphin Tale”, which in a strange twist of events almost mirrored the story of Seymour. The students utilized Skype to speak in real time with the team of the Dolphin Explorer. Biologist on board, James Livacarri, spoke with the students three times a week from the boat. Lesson plans offered myriad marine subjects which offered new vocabulary terms and helped boost the children’s reading strength.

“I knew from the beginning of my participation in the program that this would be an innovative way for my students to learn, but I would have never expected a chance to share our experiences with a producer from ‘Sea Rescue,’” stated Kosko.

Produced by Litton Entertainment, the film crew for “Sea Rescue” visited Kosko and her former students on October 25, 2013. They filmed as the classroom participated in the 10,000 Islands Dolphin Project’s Environmental Studies Program and interviewed some of the students and Kosko. “The students and I were very eager to meet the producer of Sea Rescue. (Executive Producer) Aidan Pickering and his camera crew were just wonderful. They did a fantastic job of helping us to feel at ease throughout the video taping process,” added Kosko.

Biologist James Livaccari talks to Crafton students via Skype while the crew records.

lot of different rescues and this one struck us as being very special,” explained Pickering, also stating that the half hour show will strictly be dedicated to Seymour. The show usually focuses on two rescues in two 15 minute segments. “It is not only a great rescue but so many children were involved and cared so much. It was perfect for an educational show,” he added.

In order to grasp the full story, Pickering and his crew visited Marco Island on November 13, 2013. The crew was interviewed, and a pre-selected group of VIP guests were invited to take a ride on the Dolphin Explorer as the camera crew filmed for the day. Coastal Breeze News was lucky enough to be asked to come aboard.

The local dolphin population must have known it was Seymour’s day to shine. His entire family made an appearance for the camera crew. The first two dolphins to be seen were Seymour’s mother, Halfway, and his youngest sibling, Skip, who is still a calf. Skip is one of three of Seymour’s known siblings. All four were discovered and named since the inception of the study. Simon and Kaya, his other two younger siblings, were spotted next joyfully playing around a 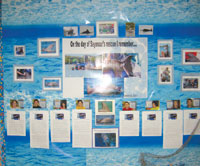 Students made a poster for the TV show describing their memories of the day Seymour was rescued. PHOTO BY SUSAN KOSKO

mile marker in a channel just outside of the Marco River. Unfortunately, Seymour was a bit camera shy that day and was not sighted.

According to Desmond, “Sea Rescue” also interviewed Dr. Brent Whitaker at the National Aquarium-Baltimore, Susanne Thurman and Walt Palmer of Cape Henlopen State Park, Sheila Dean at the Marine Mammal Stranding Center in Brigantine, New Jersey, and Dr. Harvey, a veterinarian from Florida who was involved in the rescue.

Since Seymour’s rescue, not only has he garnered national attention, but the 10,000 Islands Environmental Study Program has expanded dramatically. “We’ll have about 40 schools involved in this school year.” explained Desmond. “What has occurred is that the program is now recognized as a STEM program by many school districts, and we have been invited to present the program at their STEM conferences.”

The itinerary can be utilized as an in-school or after-school program. It has been designed to be a full-year, half-year or shorter program. Tommie Barfield Elementary has just added the program for a January through May after-school activity. “About 25 students will be able to participate in the first session. The curriculum covers not only dolphins but other animals here on Marco Island and teaches kids how to respect the

ecosystem which we are fortunate to call our backyard,” explained Maureen Essi, who will lead the program at TBE.

The success of his rescue and the excitement of the students involved in the program has encouraged the Dolphin Explorer team to continue to move forward in teaching our youth about the environment. “I’m a very fortunate guy! I work with a great group of people who are making this all happen,” stated Desmond.

“All 20 subjects contained in the program are now being converted to i.books and will begin to be offered through Apple’s i.book store in early 2014. The great part of the i.books is that we can update them annually, or as needed, with new information from the study, new calves, etc.” he explained.

“Our ‘Saving Seymour’ book will be published in paperback and as an ebook and released about 30 days prior to the TV show broadcast.” The book will be geared towards children and will tell the tale of Seymour’s tail. Pick up the book, read his story with your kids, and then watch “Sea Rescue” on Saturday morning, April 26, 2014 to see the reenactment of his amazing rescue and recovery.

To learn more about the Dolphin Explorer and it’s 10,000 Islands Dolphin Study, visit dolphinstudy.com. Learn about the Environmental Education Program at www.dolphinprojecteducation.org.