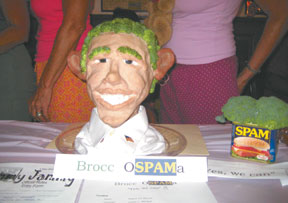 The one, the only, Brocc Ospama, Spammy Jammy 2010. PHOTOS BY NATALIE STROM/COASTAL BREEZE NEWS

Tired of the same old SPAM? Never! At least that’s what we say at The Little Bar. Mark your calendars for June 30th, as the annual Spammy Jammy event in downtown Goodland is fast approaching.

Celebrating nearly twenty years of SPAM is no easy task. Yet, year after year, The Little Bar Restaurant in Goodland hosts the event at the start of each hurricane season. In order to pay homage to the Hurricane Gods and Goddesses of Southwest Florida, the party offers up attendees in their pajamas and food and architecture made out of SPAM. By symbolically living out a night in “hurricane conditions,” i.e. eating SPAM in the dark in one’s pajamas, creators, Nicolette Bauer and Ray Bozicnik, have carried

on a tradition which seems to be working.

Music is always a priority at Spammy Jammy. John Lowbridge will be performing at 6:00 PM, followed by the Raiford Starke Band, at 9:00 PM. SPAM entries may be dropped off any time between 11:00 AM and 7:00 PM. “We need to make sure that our celebrity SPAM judges have plenty of time to eat and examine all the spectacular entries,” explains Nicolette. “It’s amazing how year after year, our Spammy Jammy enthusiasts constantly come up with new, creative ideas.”

Which has me wondering… what more can be said about The Little Bar’s Spammy Jammy that hasn’t already been said? After living through six (going on seven) Spammy Jammy parties and writing two articles about 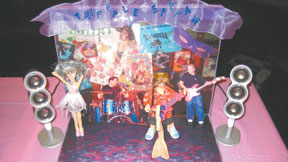 the event, I could attempt to say that I’ve seen and heard it all. However, after living through six (going on seven) Spammy Jammy parties, I can say that that would be a lie.

My first experience with the one-of-a-kind party was in 2006. Not knowing what to expect, I wore my most revealing attire, as was customary in those days. I was to be a cocktail waitress for the evening, not realizing how important my job truly was. After all, not only was it pertinent that guests always had drinks in their hand, but this was also the way The Little Bar payed homage to the Hurricane Gods and Goddesses of Southwest Florida. Trying our best to escape another event like Wilma

In 2009, my brother Roy helped with thetoilet paper races.

in 2005, we danced in our pajamas, made art and food out of SPAM and unravelled toilet paper as fast as we could. And it worked! That hurricane season brought little worry, as have the years since.

I was a bit more prepared Spammy Jammy ’07. Decked out in my finest pleather bustier, I once again provided drinks to those in attendance, as well as myself…. I don’t really remember much else from that year.

Spammy Jammy ’08 may be the chart topper of Spammy experiences for me because I WON! Well, I won along with my fellow SPAM cohorts, Ali and Katie. The three of us made a replica of the Little Bar out of SPAM, featuring the legendary Ryan Darling and

his band Tripleshot,or as we referred to them, TripleSPAM. Katie and I gave an amazing acceptance speech even though one is not required. I remember saying, “I would like to thank all the little people out there, after all this is The Little Bar.” I really only amused myself on that one.

The 2009 event was a family affair. My three siblings, Darby, George and Roy came out, along with George’s girlfriend, Katie. The boys and Katie traveled from Chicago to experience the SPAM party. Roy even participated in the annual toilet paper races, holding the end of a long pole as crazed women unravelled rolls of toilet paper as fast as they could! 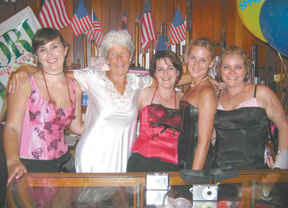 One of my few memories of Spammy Jammy 2007.

Brocc Ospama. A perfect bust of our current president made completely out of SPAM and broccoli – it was breathtaking. I also became Mistress of Spammemonies. This entailed signing in all SPAM entries, running the toilet paper races, passing out party favors and $1 Jello shots, canoodling with the SPAM judges and helping to announce the winners. What a year!

In 2011, I was honored with the Mistress of Spammemonies title, yet again. I also won second place in the art division with my FrangiSPAMi Tree.

So come on down to the one, the only, Spammy Jammy, on June 30th. Once again, I will be working our SPAM room, so stop in and say hi. Better yet,bring an entry. After all, the more SPAM

Raiford Starke isn’t afraid of SPAM or jammingon the bar.

and pajamas the Hurricane Gods and Goddesses see, the better!

“Don’t forget to stop in on Sunday, July 1st for our SPAMover celebration,” adds Nicolette. “New York duo, Left on Red will be performing in the afternoon, while Goodland’s own, Merrill, will be playing Sunday evening. And after that, we’ll see you in October!”

To learn more about the outrageous annual party, call The Little Bar Restaurant, located at 205 Harbor Place, Goodland, at (239) 394-5663. Visit their website, www.littlebarrestaurant.com for more SPAM photos and stories.

Natalie Strom has lived in Goodland for over four years and has worked in Goodland on and off for more than seven years. She is a graduate of the University of Iowa and is also a former Buzzard Queen of Stan’s Idle Hour in Goodland.