Sections of Collier beaches to close temporarily for nesting shorebirds 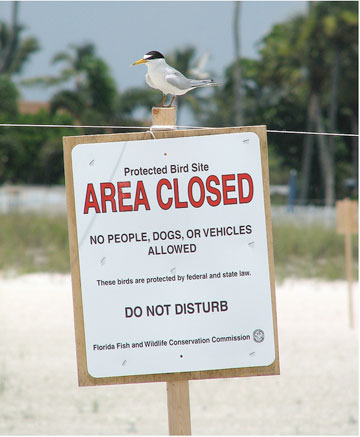 Areas will remain closed until the end of nesting season in mid-August or until nesting is complete, whichever comes first.

The four species that nest in these protected areas are the least tern, black skimmer, snowy plover and Wilson’s plover. The least tern and snowy plover are listed as state-threatened and the black skimmer is a state species of special concern, and the three birds will be included in FWC’s shorebird management plan that is being written.

FWC biologists, with the help of volunteers, manage the nesting areas to maximize nesting success for these species. Nesting areas will be closed off with “symbolic fencing,” which consists of signs connected by twine and marked with flagging.

These closed areas protect the nesting birds from unnecessary disturbances and protect their nests from being accidentally stepped on. All of these species nest in the open and lay their well-camouflaged eggs directly on the sand, making them nearly invisible to predators and to the untrained human eye.

The closed areas on the beaches may change or shift throughout the nesting season, depending on where the birds have chosen to nest at any given time.

If you would like more information about living with beach-nesting shorebirds, go to MyFWC.com/Wildlife, and download the “Co-existing with Florida’s beach-nesting birds” brochure.