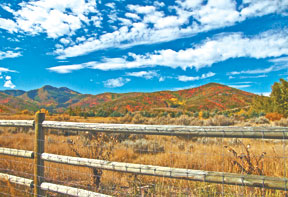 A typical view in Park City, Utah when there is no smoke in the air, taken in September, 2011. PHOTOS BY VICKIE KELBER/COASTAL BREEZE NEWS

Summer and early fall in Park City, Utah were marred by countless days of smoke filling the atmosphere, obscuring the normally bluebird skies and bright foliage. Fortunately, it was all smoke and not too much fire. There were two nearby small fires, one caused possibly by sparks from a truck traveling down the highway and another by someone shooting at metal targets. The west is dry, drier than we in southwest Florida can really imagine, even during our driest months. Tinderbox dry brush is easy prey to a spark, lightening, or inane acts such as shooting at metal targets.

The fires that brought smoke to this town 7,000 feet above sea level came primarily from Washington and Idaho. Much of the northwest area including Colorado, Idaho, Utah, Washington, Oregon, Montana, and parts of California struggled this year with smoky conditions. With record breaking high temperatures and lack of rain, at one point more than 70 large and uncounted small fires ravaged the western states. While the smoke primarily affected northern states west of the Rockies, NASA’s website reported at the end of September that some of the smoke had made its way to the Atlantic Ocean and as far as Greenland. The site explained that the hotter a fire, the higher the smoke can go and, in turn, the farther it travels because of the strong winds found high in the atmosphere.

A website called wildfiretoday.com operated by a former wildland firefighter who now owns a private consulting service and is a recognized expert witness in wildland fire, showed that in September the smoke from the Washington and Idaho fires was present in half of the United States, spreading as far south as Texas and as far east as West Virginia.

In Idaho, lingering heavy smoke cover resulted in warnings for people to stay indoors and wear masks when outside. Friends visiting a relative in Boise reported that their breathing was impaired by the thick smoke pollution.

The fires this year began in May in New Mexico and Arizona. June saw fires in Colorado, Utah and Idaho, followed by Wyoming and Montana, then Idaho and Nevada, and finally Washington, Oregon, and California. Some of the fires such as the Mustang Complex fire in Idaho burned for more than two months. Fortunately for New Mexico and Arizona, a wet rainy season (which they call “monsoon” season) kept later fire to a minimum. North of those states, however, the summer was very dry. An article in USA Today referred to it as “epic dryness”. Many parts of the west are reported to be experiencing “severe” and “extreme” droughts.

In June, smoke from the Colorado fires was reported covering the skies in Minnesota. Friends of ours in Colorado reported that on Fourth of July, smoke cover was so heavy in their neighborhood in Castle Rock that they could not see to the end of their block. Initially suspecting that there was a fire nearby, they found out that it was from fires in Wyoming.

By the end of the 2012, wildfire season, the record set in 2006 for most acres burned will have been broken. The third worst season was last year, 2011. Various sites report that although there are “ups” and “downs”, overall there has been a steady increase in the number of fires and the amount of land burned over the last 40 years and the fire season is getting longer.

While the final cause of many of the fires 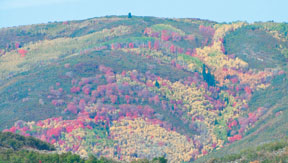 A close-up of the hillsides obscured by smoke.

is lightning, a number of factors have come together to cause tinderbox conditions. In recent years, snow cover in the west has decreased, spring has arrived earlier resulting in advanced snow melt, and temperatures have been higher. Changes in forestry practices have resulted in denser forests providing more fuel for fires and these practices are being reexamined.

Certainly the west has experienced previous droughts, but what seems to be contributing to the rise of fires is the combination of drought conditions with higher temperatures. The US National Academy of Sciences reported that the interior west is drier than it has been in 500 years. Changes in the jet stream have increased the dry weather in the west. Temperatures are higher and they are reported higher earlier and later in the year.

As more and more people have moved closer to forested and wilderness areas, forestry practices have changed. In the early 1900’s, wildfire fighters began fighting natural fires (known as “fire suppression”) that used to clear out underbrush and keep forest density down. Denser forests mean that when fires do break out, there is more to burn. The current Chief of the US Forest Service has recommended changes in these practices including more prescribed burning, something with which we who live on the edge of the Everglades are familiar. People moving closer to fire zones has also resulted in the increase of fires caused by human factors, including electrical arcing and fallen power lines.

While fire suppression has an effect, major research conducted at the University of Arizona in Tuscan concluded that change in the climate is the major factor in the increase of western fires. They noted that increase in fire frequency is highly correlated to temperature and the onset and speed of seasonal melting of the snowpack.

You can debate climate change all you want. Whether you believe in climate change or not, the reality in the west is that snow pack is down, summers are hotter and lasting longer and one of the prices is the increase in wildfires. These fires affect not just those directly in their path but air quality for people miles and miles away.

Wildfires can affect closures of roads, parks, and other areas frequented by tourists. The USDA Forest Service maintains a website that reports on large fires throughout the United States at activefiremaps.fs.fed.us. Individual states maintain similar sites. Most of these sites report just fires, not smokey conditions. Montana is an exception; it reports on wildfire smoke and unhealthy or hazardous air quality due to smoke at svc.mt.gov/deq/ smokereport/mostRecentUpdate.aspx. At the end of September, they were reporting poor air quality over most of the state, with very unhealthy and hazardous conditions in a number of specific areas. If you are traveling to an area, try to Google the name of the state, park, or area along with the words “smoke” and “fire” and you should be able to find some type of report. If you are interested in the monitoring of drought conditions throughout the United States, droughtmonitor.unl.edu does just that with updates weekly.