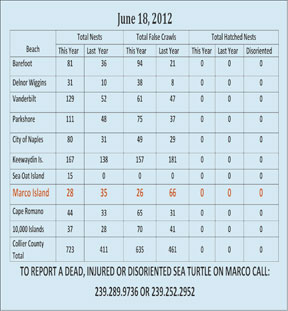 Loggerhead sea turtles live a life full of hardships. From the very beginning, odds of survival for a fledgling sea turtle are one in 1,000. Baby sea turtles are confronted with dangers before they even hatch!

One primary threat to a sea turtle nest is location. Thanks to the dedication of local sea turtle monitors, nests are now marked off so that they are not disturbed by humans. Without these markings, one may easily step on the nest, crushing the eggs below. Another issue that arises with sea turtle location is proximity to the shore line. When a Loggerhead female lays her eggs too close to the water, there is a chance that the eggs can drown. Often times, professionals will move these nests to avoid the loss of nearly 100 eggs, a typical nest size.

The main predator of the pre-hatched sea turtle is the ghost crab. These crabs, named for their almost see-through color, burrow into sea turtle nests, using their claws to crack the eggs and feast on the turtles before they ever have a chance to see the light of the moon.

If the egg is lucky enough to survive to become a hatchling, it faces one of its greatest dangers immediately: making it to the sea. Hatchlings follow the moonlight and can be misguided due to false lighting. This is why beaches, such as Marco, have lighting restrictions during nesting season. Sea turtle hatchlings that run away from the water, rather than to it, have a very low rate of survival.

If the hatchling does run in the right direction, it has to be fast. Birds and sea animals of prey are eagerly awaiting the influx of hundreds of little ones into the ocean. Once they make it to sea, they rely on sheer luck and survival of the fittest.

Due to heavy wind, rain and tidal surge from Tropical Storm Debby, Collier County has not released an official nest count since June 18. It is likely that some of the nests will have been disturbed due to the weather. Check out www.coastalbreezenews.com for the latest nest count updates as the occur.