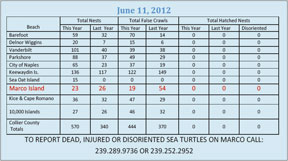 In 1995, Collier County realized the need to monitor sea turtle nests more closely along its beaches. As female sea turtles return to their place of birth to nest, monitoring their actions gives a better idea as to the health of the Loggerhead sea turtles along Collier’s coastline.

A small crew of dedicated employees and volunteers faithfully count and mark nests during nesting season (May through October). They also track false crawls, nest location compared to sea level, GPS coordinates of each nest and false crawl and compare their results to prior years.

Mary Nelson is Marco Island’s “Sea Turtle Lady.” She has been monitoring the sea turtle nests from Tigertail to South Beach since 1991. She originally volunteered and was hired in 1995 when the County began its official monitoring process. Early risers will see Mary on her ATV every morning, riding along the water line in search of sea turtle tracks. She has a local following who help her out, letting her know what they’ve seen as they walk the beach.

Mary also cleans up garbage and debris as she travels the beach. Many false crawls can be attributed to trash and other items left along the shore line. A female sea turtle will easily turn around and head back for the water if there is something in her way. This is why it is important to always clean up after a fun day at the beach. Removing beach chairs, umbrellas, garbage, debris and filling holes and flattening sand mounds can help increase chances of nesting. Ordinances are in place throughout sea turtle nesting season to ensure cleaner beaches and low lighting, all of which encourage successful nesting and hatching of the Loggerhead sea turtle.