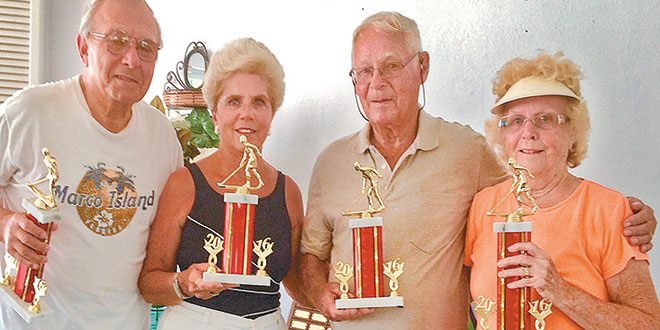 On March 23, twelve teams gathered for the Sea Breeze South Annual Shuffleboard Tournament to compete for the prized trophies.

Players and spectators watched and played as some teams won, while others were eliminated in the competition. The original 48 players soon dwindled to 24, and eventually 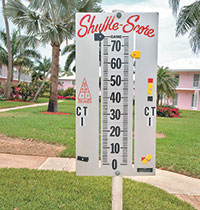 At Seabreeze South, a scoreboard keeps track for players at the annual shuffleboard tournament.

the final three teams were ready for the play-offs.

During the lunchtime break, grilled hamburgers were served with all the fixings. Joe Mazzoni, (the chef) cooked up an astounding 84 burgers for the crowd.

In the final playoff were Gayle Stoller and Jack Sullivan vs. Anita Sullivan and 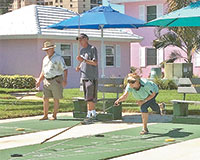 Mike Spinelli. The winning trophies were awarded to Anita and Mike. Congratulations to the 2016 tournament winners! To celebrate, everyone enjoyed an ice cream and cake reception in the clubhouse.

Special thanks go to the many, many people who pitched in and worked together to make this a memorable day.