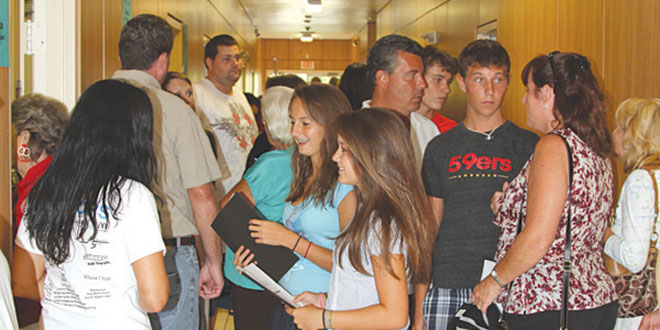 Since Dec. 14, 2012, school security and student safety have been at the forefront of the minds of politicians, school districts, administrators, local law enforcement and parents alike. On that fateful day, a deeply disturbed Adam Lanza stormed into Sandy Hook Elementary School in Newtown, CT, and fatally shot 20 students and six adults.

Even now, companion bills (SB 968/HB 753) are making their way through the Florida Legislature in hopes of allowing schools to create their own programs to authorize certain trained employees to carry concealed weapons on campus. These employees would be required to have a concealed weapons permit and have law enforcement or military experience as well.

The reason: simple math. Schettino faithfully serves the three schools, which have a combined enrollment of nearly 1,200 students. While TBE and MICMS have a shared campus located just seconds away from the Marco Island Police Station, Fire-Rescue Department and City Hall, MIA’s campus is about three miles east on San Marco Road.

“We cannot control three schools with one officer,” says Hunter. “This is not about the color of the uniform but whether we are providing security for our schools…Between the two officers, they will be able to cover all three campuses.”

New MIA Principal Melissa Scott says she is aware of Chief Hunter’s plan, and as she understands it, her open-campus will be receiving more attention with the two-officer combination as they will be able to drive by and pop in to check on things more often. Additionally, MIPD is working with Scott to set up a walk through of the school to assess any potential security risks.

Still, not everyone in Marco Island’s educational community is thrilled with the plan. On April 17, Tarik Ayasun, president of the board of MICMS, wrote a letter to Marco Island City Manager Roger Hernstadt, stating Charter Middle School officials were “categorically opposed to this change.” The letter went on to express confusion and frustration that school officials “were not part of the process or discussion about the proposal.”

“We do not have the ability or space to provide an office, desk, phone, computer and whatever other supplies a full-time (School Resource Officer) typically requires. Furthermore, we have grave concerns of the negative cultural change that will take place on our campus with the presence of additional SROs,” Ayasun wrote.

He closed his letter by praising Officer Schettino and saying that he is welcome at MICMS any time “because of the relationships that have been built, the understanding and experience that he brings, the logical approach that he uses and the care for the student(s).”

TBE Principal Dr. Jory Westberry said she has not spoken to Chief Hunter about the plan and declined comment on the issue.

A Tale of Budgets

It appears, though, the roots of this situation go deeper than recent history reveals. According to officials with Collier County Public Schools and the CCSO, the Sheriff’s Office provides SROs to public schools throughout the county at no charge to the schools, and while no one interviewed for this story can remember why, Marco Island chose years ago to provide — and pay for — its own SRO.

When the city incorporated in 1997, Marco Island had only one school in TBE, which was manageable for one SRO. MICMS opened a year later, and its eventual shared campus with TBE allowed for continued easy coverage by one SRO.

However, the opening of MIA’s campus last year coupled with heightened awareness of school safety issues forced Chief Hunter’s hand. During the city’s budget negotiations for 2014, Hunter asked for additional funding to hire a second SRO. The Budget Sub-Committee directed him to seek help from CCSO in an effort to recoup more county services for the tax dollars Marco Islanders pay to Collier County. While Collier County Sheriff Kevin Rambosk could not provide funding for an additional MIPD SRO, he offered to send one of his deputies to Marco Island to help service the schools — and on the county’s dime.

“This is the status for the next month of school and for next school year,” Hunter notes. “(CCSO) will provide one school resource officer to supplement what we already do.”

Marco Island City Manager Hernstadt, whose son attends MIA, thinks the current deal with the CCSO is a good one. “Would you rather have one officer working 40 hours a week or two working 80 hours a week?” he asks. “Why would we not take an additional officer at no added cost to the city? It offers the campuses, teachers and students more protection.”

“We are super diligent about our schools,” Hernstadt adds. “They are definitely a risk area for us.”

It seems this debate will not end any time soon either. The temporary nature of the MIPD’s agreement with the CCSO dictates that the question will come up again during the city’s new budget cycle.

“This is a short-term fix for long-term problem,” Hunter concedes. “We have to roll this into the budget deliberation. We have to have a plan for it.”