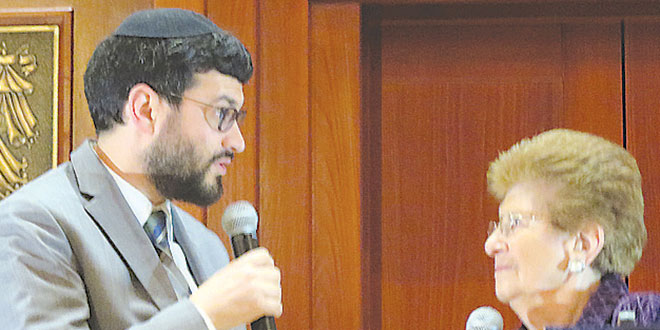 It was a full house of over 400 people (with an equal number disappointed for not getting tickets) for Chabad of Naples’ inspiring and thought-provoking evening with Mrs. Rena Finder, the youngest person on Oskar Schindler’s List; this saved her life and her mother’s during the Holocaust. Now approaching her 87th year, Rena kept the audience spellbound as she stood before them for more than one hour, relating her moving story of courage and survival.

Rena was a child of ten when her family life in Krakow, Poland was abruptly turned upside down with the arrival of the Germans in September 1939. Along with other Jewish families, Rena and her parents were forced to leave their home and their possessions and move to a ghetto where they faced poverty, starvation, illness, and the whim of the Gestapo, who arrived at any hour of the night or day to “relocate” people who were never seen again. Such was the fate of Rena’s beloved father Moses and her grandparents.

In 1943 the ghetto was closed down and everyone was relocated to Plaszow, a forced labor camp that became a concentration camp. Imagine Rena’s confusion: one moment the happy and loved child of a large extended family, and overnight, an enemy of the state, persecuted and punished for just being Jewish.

Rena and her mother Rozia were classified as “metal workers,” and placed in a slave-labor camp where enamel kitchenware and ammunition were manufactured for the German military. The factory was owned by the now-renowned Oskar Schindler, whom Rena described as charming, handsome and ambitious. In 1944 when the Germans ordered Schindler to close his factory, he was able to convince them to allow him to move it to Czechoslovakia and take over one thousand of his Jewish workers with him, easing their transit with bribes and expensive gifts. On the way to the new factory, the 300 women and 700 men were sent to Auschwitz for several weeks, and as Rena recalled, “A terrible place to be. If it weren’t for Oskar Schindler, those people would not have survived.”

According to Rena, when everybody said there’s nothing that could be done, Schindler was one of the people who showed the world otherwise. Oskar Schindler said, “I’m not going to stand by and do nothing.” And that has become Rena Finder’s motto and message over the years.

Rena met her husband Mark Finder, also a survivor, in a displaced persons’ camp after the war, and they were married from 1946 until his death at age 90, four years ago.

Rena Finder is a remarkable woman, not just because of the horrors and tragedy she endured, but because she has since made it her life’s work not only to share her personal story, but also to use it to impress, especially children, with the necessity of not standing by and witnessing abuse, but standing up, going for help, and not becoming apathetic.

“What an honor for Rena Finder, the youngest person to have been saved from the Holocaust by being on Schindler’s List, that so many people in the community wished to attend as she addressed a mammoth crowd at Chabad of Naples on February 11,” said Rabbi Fishel Zaklos, Chabad’s spiritual leader. “It’s always our dearest wish to hold an event with a full house and a sell-out crowd, but this week we found ourselves in the unenviable position of actually having to turn away hundreds of people who would have liked to come and meet Mrs. Finder, our guest speaker. We have many seats to fill, but the outpouring of enthusiasm was simply overwhelming. We regret having to turn so many people away, but what a statement on behalf of Mrs. Finder and her inspiring message of hope and perseverance!”

The audience, including 50 students from local schools, was simply awestruck listening to Mrs. Finder speak.

“Rena Finder will change the path of many through her sharing last night, and I was proud to have been there as a witness to what is truly difficult in life and to her message of courage!” said Wendy Hodgson, Collier County Public School social studies and character education coordinator.

Naples Councilman Bill Barnett presented Mrs. Finder with a Proclamation from the City of Naples.

When Australian author Thomas Keneally’s book was published in 1982, it was called “Schindler’s Ark.” It was a Booker Prize-winning historical novel, released as “Schindler’s List” in America, where it won the Los Angeles Times Book Prize for Fiction in 1983. Oskar Schindler was a German industrialist and spy, and a member of the Nazi Party. He is credited with saving the lives of 1,200 Jews during the Holocaust by employing them in his various factories, which were located in occupied Poland. The book was finally adapted to film by Steven Spielberg in 1993, and in 1994 won approximately 34 awards, including the Academy Award for Best Picture. Many have likely read the book or seen the movie, which is considered historical fiction. The audience at Chabad heard the true story, firsthand, from one of its real main characters, Rena Finder.