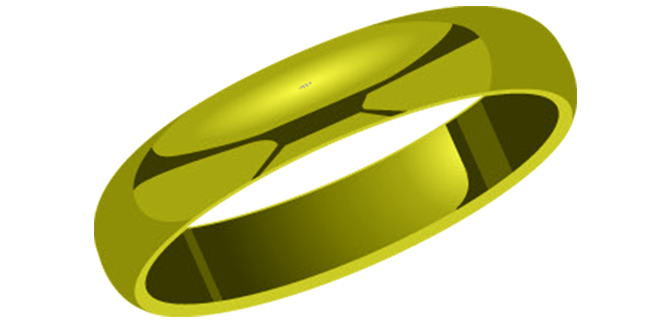 Just want to issue a heads up warning to my faithful followers. Apparently, there are some unscrupulous folks who are wandering around Marco and Naples selling jewelry under the pretense of it being real gold. It’s shiny and looks good, but the ring or chain feels a little too lightweight. That’s because it is gold plated brass! And the so-called diamonds are just cheap glass.

Last week I examined a gent’s ring made of gold plated brass, with a supposedly one carat round diamond in the center. The “diamond “ was glass, even though the ring was stamped 14kt. and even had a Zale’s quality stamp! The now irate customer paid $500 for basically a worthless piece of junk.

I could go on for pages on end describing all the fakes, swindles and scams presented to me over the years. I found out that most people refuse to accept the fact that they were duped. Some will laugh, some will cry.

Two days before the incident above, a gentleman asked me the value of a heavy “gold” chain he just purchased from “some guy.” You guessed it – gold plated brass chain. He paid $1,200.  The chains actual value…$12.

Needless to say this guy popped a gasket on me? “What are you talking about? The chain is clearly marked 14kt. made in Italy!” It has now turned into an emotional situation. Nobody enjoys finding out they have been swindled, and there is no doubt in my mind that’s what has happened here. I proceeded to show him my “cup of shame” that just so happens to be brimming with fake chains, bracelets rings and earrings, all clearly marked 18kt. or 14kt. gold or as we professionals called them in the city of Boston, “gaffers.”

Ok. So let’s go back a couple of thousand years. It seems that even ancient Rome had a jewelry and coin counterfeit problem. It is well documented and the penalty getting caught selling that stuff was…death.

Today the penalties are not so severe. Anyone who travels abroad, especially in Europe, will notice there are tons of knock-offs to buy on any plaza or street corner. “Gucci” or “Coach” handbags, watches and jewelry knock-offs are widely available, to name just two. It’s all highly illegal, and in Florence, Italy even the unknowing tourist buying this crap is likely to get arrested along with the black-marketer.

It always comes down to simple economics; if the price seems too cheap, most likely the object is just that…cheap

I’m reminded about a phenomenon that used to occur years ago whenever the Italian Navy sailed into the port of Boston. The jewelers building would get flooded with these heavy and wide three-tone “gold bracelets,” all purchased from foreign sailors in dark bars or nightclubs. The prices paid were $100 to $1,000 bucks. Every bracelet was a fake. They burned hundreds of naive Bostonians, and this went on for years. This is where the saying, “A sucker is born every minute,” certainly holds true.

I could go on for pages on end describing all the fakes, swindles and scams presented to me over the years. I found out that most people refuse to accept the fact that they were duped. Some will laugh, some will cry.

It’s a fact of life. There will always be somebody out there who will go to whatever means it takes to separate you from your hard earned money.

Several years ago, sitting in an outdoor café in Paris, France, I was enjoying the best bubbly and pate I had ever experienced in my life, complete with free street entertainment. I had the pleasure of witnessing from a distance a scam. The gypsies were performing and having a field day fleecing unsuspecting tourists. It involved placing a heavy gold wedding band stamped clearly 18kt. on the sidewalk and waiting until someone in the passing crowds noticed it. Soon, a sharp-eyed tourist would make an effort to pick it up. Like a shot, a gypsy would swoop in out of thin air and scoop the ring up, show it to the disappointed mark, let him or her feel the weight and see the stamp, then proceed to sell it to them cheap! They would get anywhere from 10 to 100 euros per sucker, and did I mention that the ring is solid brass and totally worthless? Apparently there is an endless supply of gypsies and fake wedding bands in Paris.

If it seems too good to be true, tell the seller you want to have it checked out at nearby jewelry store before you part with your money. Watch their reaction. I’m sure they will want no part of it.

I have also seen customers swindled by cruise line sanctioned jewelry stores in foreign ports, especially in the Caribbean. It pays to be educated before purchasing from sketchy sellers.

A question was submitted about a badly scratched amethyst ring, and what could be done about it. There are two ways to remedy the problem.

1. The gem has to be removed from the setting and sent to a gem cutter (lapidary shop) for a complete cutting/polishing of the top surface. This may be expensive – there are several costs such as postage and insurance, the cutter’s fee, not to mention the resetting of the gem, with the possibility of new prongs being needed. You are looking at several hundreds of dollars.

2. Remove and discard the scratched gem, and replace it with a new amethyst. This is many times the best way to go. The cost depends on stone size and conditions of the existing prongs. Bring it in to find out the exact cost.

Richard Alan is a designer/goldsmith and Marco’s “jewelry genius” for almost a quarter of a century. He owns the Harbor Goldsmith at Island Plaza and welcomes your questions about all that glitters. 239-394-9275, www.harborgoldsmith.com.