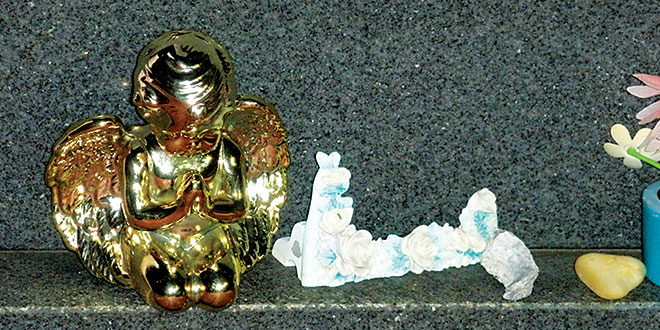 Some of the toys that grace the base of the Christmas Box Angel monument at the Marco Island Cemetery.

A solemn remembrance of young lives ended too soon to bring comfort and healing to the loved ones who mourn their passing. That mission is at the core of the annual Christmas Box Angel Memorial Service, which was held recently at the Marco Island Cemetery.

As the Saturday sun gave way to the evening moon, Ed Beck welcomed the array of friends and family who attended what was the 15th such service at the cemetery’s Christmas Box Angel statue.

The service is held each Dec. 6, the day Richard Paul Evans cited in his book “The Christmas Box,” for the annual placement of a white flower on the grave of a little girl who died in Salt Lake City on that date, said Beck.

It’s also the traditional day of the Feast of St. Nicholas, who has become a symbol of childhood. The date also is celebrated as Children’s Day in many countries, he added.

Beck and his wife Beth lost their son, Tyler, almost 20 years ago.

Church, came a message by Roger Moll, Jr. Moll opened with a quote from Henry Ward Beecher: “Tears are 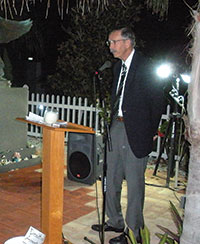 Ed Beck performs that reading of names of deceased children from Marco as part of the 15th Christmas Box Angel Memorial Service at the Marco Island Cemetery.

often the telescope by which men see far into heaven.”

Tears were something he shared with his and his wife Nanette’s late daughter Kendall, through happy and sad times, said Moll. He said the experience of losing Kendall has taught him that “you just have to accept some things that happen,” and it has also left him pondering just what it’s like in Heaven.

“I have no tears, but I have my tear maker,” Moll added. “I’m still Kendall’s daddy.”

As Beck read a list of about 220 names of the youths for whom there are memorial brick pavers at the statue, each attendee lit a candle in remembrance of their loved one. Then, while singing the first verse of “Silent Night,” people placed while flowers upon the Christmas Box Angel statue, which closed out the one-half-hour long service.

Claudine Boy and her mother, Sandy, are on the event’s planning committee. Their nephew and grandson, Johnny Thomas Boy, died in 2006 at age 18.

Claudine said she sees new attendees every year, some of them people she’s known for years. “But we didn’t know that we had this sort 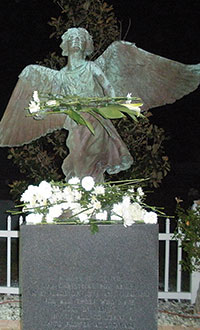 The Christmas Box Angel monument at the Marco Island Cemetery.

of thing in common,” she added. “We don’t talk about it. It’s more of like a little wink that says, ‘I feel for you.’”

Ray and Ginny Kane also came to pay their respects. Ginny has lost a son and also four older brothers and sisters over the last few years.

“All of them have bricks here, and this is not only a place of healing for us, it actually made us feel like we have finally come home,” said Ray, who like his wife, hails from the Philadelphia area. “This is really now our home. We don’t think of this as anything but our home, and this beautiful place and these beautiful ceremonies make us feel we belong here. We love it. We come every year and we’re going to be promoting it and helping out in the future.”

The organizing committee for the Christmas Box Angel Memorial Service is seeking volunteers to assist with the annual event. To join or learn more, contact Nanette Moll at 239-394-7242, ext. 93.

Nanette also can be contacted by anyone seeking the help of a grief support group for the loss of a child. She leads the Coffee and Comfort Group on the island.