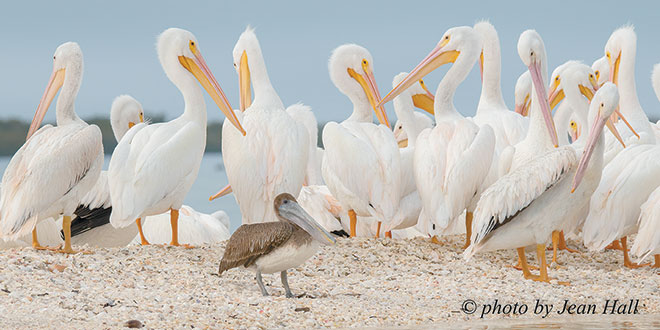 A brown pelican dwarfed by his larger cousins, the American white pelican.

By a unanimous vote, the Florida Fish and Wildlife Conservation Commission (FWC) designated the Second Chance (SC) sandbar as a Critical Wildlife Area (CWA) in November 2015. FWC Commissioner Liesa Priddy, a Southwest Florida resident, was an ardent advocate for the CWA designation and recently visited the SC sandbar. Commissioner Ron Bergeron and Chairman Brian Yablonski also were strong supporters of the CWA designation for SC sandbar.

Annually, from March 1st to August 31st, SC is closed to public access for the summer nesting season.

The sandbar is located one mile southeast of Cape Romano. It is owned by the State of Florida and is managed by Rookery Bay National Estuarine 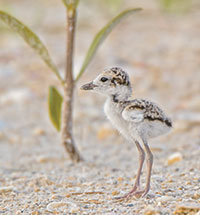 Research Reserve (RBNERR) in cooperation with Audubon Florida and the Department of Environmental Protection.

The sandbar has been closed annually since 2001 during nesting season, but this is the first time that CWA rules are in place prohibiting anglers, boats, people and dogs from visiting the area. RBNERR and FWC have installed perimeters and large signs to mark the closed areas. Adam DiNuovo, a shorebird biologist with Audubon Florida working in partnership with Rookery Bay, monitors the SC sandbar weekly. Just last week, he sighted about 150 least terns performing their courtship rituals, and counted four pairs of Wilson plovers with one active nest. Nesting areas are monitored weekly by 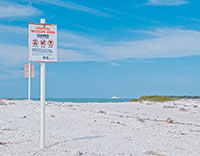 both Rookery Bay staff and volunteers, throughout the nesting season.

Harassment or removal of endangered or threatened birds, their eggs or young is a violation of state law and violators are subject to criminal penalties. In addition, any attempt to remove or possess any migratory bird, their nests or eggs is a violation of federal law. FWC will issue tickets if they catch anglers, boaters and anyone else landing on the SC sandbar. All people are cautioned and urged to avoid accessing or approaching the SC sandbar until after August 31st, when nesting season comes to a close. Boating visitors may return when the signs are removed on August 31st, 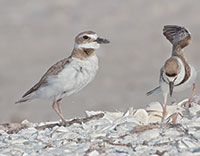 Pair of Wilson plover scraping and getting ready to lay eggs.

after the birds have left.

Each spring the least terns return from their wintering grounds in Central or South America and settle on the SC sandbar. This sandbar now serves as a habitat for the largest beach-nesting least terns in South Florida. The least terns and black skimmers are both listed as threatened, while the Wilson plover is a species of special concern. With everyone’s cooperation, the Second Chance Critical Wildlife Area has a good chance for a successful nesting season.

Keep your distance from resting birds.

Take photos from a reasonable distance.

Do not force birds to fly.

Keep the beach clean and take your trash home with you.