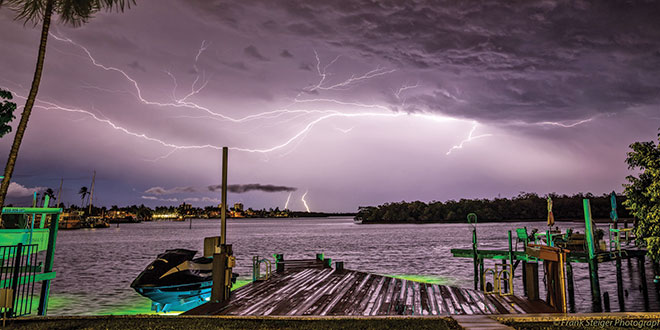 The evening weather wasn’t at its most cooperative, but the rain, thunder and lightning held up long enough for Marco Island’s Fourth of July fireworks at Residents Beach to occur.

The annual Marco Island Civic Association’s Uncle Sam’s Sand Jam celebration started early in the day, with a variety of activities, games, music and food for beachgoers of all ages. Scores of residents and visitors filled the beach, enjoying pleasant weather during the daylight hours. Children played tug-of-war, built sandcastles, and competed in hula-hoop and limbo contests.

By far, one of the favorite contests of the day was for the “Most Patriotic Bathing Suit,” which brought out

some interesting red, white and blue attire and accessories, including hats, sunglasses and wigs.

This fun day of festivities culminated in an unforgettable evening fireworks display. Many beachgoers left early, concerned that the annual fireworks show would be cancelled due to the evening’s stormy weather. But those that braved the rain and stayed on the beach rain were rewarded with a spectacular show – dramatic lightening illuminating the sky along with bursting colorful fireworks against the Marco Island skyline.

Marco Island enjoyed the annual July 4th fireworks display thanks to the joint effort of the City of Marco Island, the Marco Island Chamber of Commerce, and many local businesses and individuals.