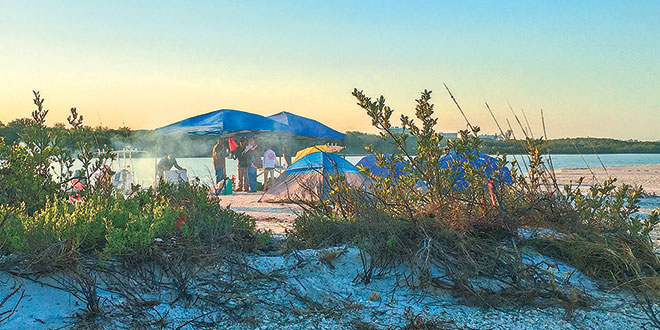 On Saturday morning, May 7th, around 10 AM, a dog owner was seen happily walking her dog around a shorebird posted area at Sand Dollar spit.

On Saturday mid-day, May 7th, there were kite boarders and boats observed on Sand Dollar Island. One beachgoer, on the Hideaway Beach side, counted 40 boats and close to 300 people on Sand Dollar Island. This area, also known as Big Marco Pass, is a posted Critical Wildlife Area (CWA) and nesting birds are inside posted areas, being flushed by the kite boarders and by the abundance of people 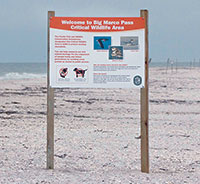 Critical Wildlife Areas are vital to the survival of Marco’s birds and turtles. Observe the posted areas and report violators.

walking through the dune area where least terns are trying to nest. Their activity is in violation of the Florida Fish & Wildlife Conservation Commission (FWC) for posted Critical Wildlife Areas. This is a nightmare for both the FWC enforcement and the Marco Island Police Department.

“It shall be unlawful for any person to have open fires, barbecue grills, including portable grills, or other incendiary devices on the beaches of Marco Island.”

A dog on Sand Dollar Island during nesting season is an FWC violation for posted areas.

Audubon, Florida just confirmed that there is a colony of least terns and black skimmers at the Critical Wildlife Area of Sand Dollar Island, also referred to as Big Marco Pass.

We need your help. With the dredging project just getting underway, which is a major stressor on our beaches, it is more critical than ever to make sure violators are being held accountable.

We need to protect the nesting birds and sea turtles, and keep the area safe from fires. Your help is needed to ensure Marco Island’s Beach ordinance is fully enforced.

unlawful for any person owning or having under their control any animal, to permit such animal upon the beach, except service dogs accompanying persons with special needs.”

• Write down the boat number, take pictures, and a description of the people and the violation.

If you see dogs or fires at a Critical Wildlife Area, such as Sand Dollar Island, please call the Marco Island Police Department’s non-emergency number at 239-389-5050 and report it immediately.