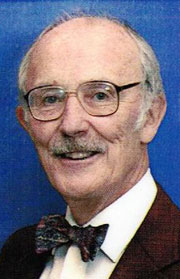 Samuel (Sam) P. Willits, born 29 July 1924, loving husband of Florence, father of Linda Sandlin, Steven and David Willits, and resident of Barrington, IL since 1961, died unexpectedly April 5, 2012 in Marco Island, FL, where he enjoyed many winter seasons. Sam is a University of Michigan graduate, served as a Navy officer during WWII, and co-founded the Lutheran Church of the Atonement in Barrington, IL. Sam was a creative engineer and inventor with hundreds of patents to his credit. He was the founder and CEO of Spartanics, Ltd in Rolling Meadows, IL for over 40 years that created and distributed Sam’s many photo optic devices. He still consulted with them daily. Sam was the ultimate optimist, loved his Lord, his family and everyone he met. He will be greatly missed by many, many family and friends from Barrington to Marco Island including his wife of 67 years, 3 children, his son-in-law, Alan Sandlin and daughter-in-law, Judy Willits and 3 grand children, Kelsey, Scott and Mackenzie. Visitation in Marco Island will be at the Hodges-Josberger Funeral Home from 6-8pm Tues, April 10 with services and reception at the Marco Presbyterian Church on Wed, April 11 at 11am. In lieu of flowers please make your kind donations to Marco Presbyterian Church, 875 W Elkcam Circle, Marco Island, FL 34145, 239-394-8186.