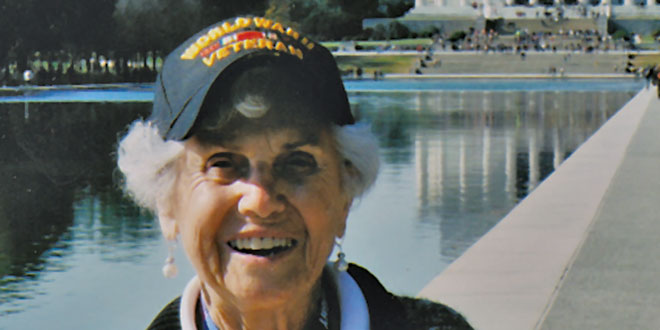 Rachael at the National Mall Reflection Pool on her Honor Flight visit.

Rachael Pietrini served in the WAVES November 1943 to March 1946 as a yeoman third class but prior to that served her country as a civil servant in the U.S. Department of the Navy. Shortly after the WAVES (Women Accepted for Volunteer Emergency Services) were instituted, Rachael expressed to her supervisor, a rear admiral, that she wanted to enlist. He quipped that at 90-some pounds, she was “A ripple, not a WAVE,” and gave her a glowing recommendation.

Born and raised in Bridgeport, Connecticut, Rachael was the youngest of five children born to Italian immigrant parents. After her graduation from Warren Harding High School, Rachael worked at Sikorsky Aircraft, as did her sisters. Most of their friends worked at either Sikorsky or the other prominent local employer, Remington Arms.

During the war both her sisters continued working at Sikorsky. Rachael had taken the civil service examination in high school and after the attack on Pearl Harbor, was hired by the Navy Department to work in procurements, the major task of the time being replenishing the fleet with new ships. Her job was support staff to the admiral in charge of arms and armaments. Rachael knew which arms, armaments and ammunitions were required for each style of ship being constructed, including which size guns they were equipped to mount, as her main job was to be sure this equipment was stocked and available for installation when needed.

By the time Rachael joined the WAVES in 1943, her brother John was also serving in the military so the Pietrini household had two members dedicated to the war effort. Their other brother was 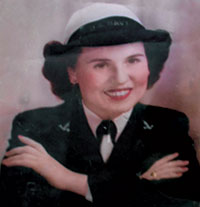 a family man and did not serve in a military capacity.

The WAVES were chartered in August 1942 and from initiation were accepted as a vital part of the Navy Department. They received the same rank and pay as their male counterparts, as well as the same discipline. WAVES constituted about 2.5% of the navy’s total force, served throughout the war, and in some areas were actually the majority personnel. They were not only support staff like Rachael, but many were trainers, instructing Navy flight crews on reading instruments, parachute rigging, stowing cargo, etc. WAVES also were mechanics, working on airplanes and other equipment. WAVES officers with a mathematics background or a pilot license were recruited for training as air navigation instructors. Their own training was very tough and required a high score to gain their certification as instructors. In addition to instructing cadets, the WAVES instructors also wrote manuals, designed and implemented training programs.

It is interesting to note that WAVES pilots involved in flight training and other duties were treated the same as their male counterparts and were not subjected to the treatment received by WASPs (Women Air Force Service Pilots). WASPs were not trained by the Army but had to be licensed experienced pilots before they were “accepted” as civilian employees with no rank or privileges. Despite their stellar performance in every task assigned them, the WASPs were abruptly disbanded before the end of the war and replaced by inexperienced males who all needed to be trained and licensed as pilots at the government’s expense. The WAVES aerial navigation instructors earned their place as the first females in 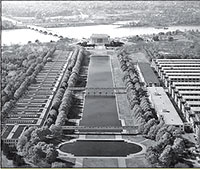 U.S. military history whose duties were identical to regular aircrew staff. The role of nurses in all military branches is widely recognized and rightfully admired, but little is known by the public of women who served in other capacities.

During the early part of the war, all WAVES were restricted stateside and not allowed to serve in combat areas, but later were stationed overseas. Many were sent to Hawaii. By the end of the war, there were 8,000 female officers and about 80,000 enlisted. Many of them stayed in the service beyond the end of the war to carry on the work of rebuilding and restructuring required in the post-war era.

Rachael was stateside during her service. After being accepted into the WAVES, she was sent to the “U.S.S. Hunter,” the Bronx campus of Hunter College, which the Navy had leased from the university for training purposes. Interestingly, in 1946 this building was occupied by the budding United Nations, which held its first Security Council meeting there, until it moved to other headquarters.

Following her stint at U.S.S. Hunter, Rachael moved on to Cedar Falls, Iowa to complete her basic training. They were put on a train, which was routed through Canada to take them from New York to Cedar Falls, Iowa. At discharge, they were awarded an additional 100 dollars for “overseas duty.” At the end of basic, they were allowed to choose their assignments – Newport, Rhode Island or Asbury Park, New Jersey.

Rachael chose Asbury Park, New Jersey, one of 12 WAVES working at the Pre-Midshipmen School, which housed 2,500 young male college graduates. One of the local hotels had 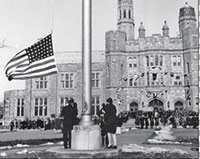 been leased as a barracks for the students. The WAVES bunked at another hotel. Pre-midshipmen schools, typically four months long, were places where they parked the boys until there was room for them in the midshipmen schools. Cornell, Notre Dame and Northwestern were universities used by the Navy as midshipmen schools for their pre-midshipmen. The Army and Marines had similar programs. Not only was the military able to fulfill their need for educated officers capable of conducting modern warfare, but colleges across the country were saved from having to close their doors due to low enrollment. This federal program was a win-win.

A physician sent Rachael to the Naval Convalescent Hospital to undergo corrective surgery on her eyes, after which they wanted to keep her close to New York City for follow up. Her next duty was the Third Naval District Headquarters in lower Manhattan. She enjoyed this tour as a secretary, especially watching the ships return from Europe. Her boss took her with him to visit all the returned ships, moored next to each other, welcoming the crews home and assessing their ordnance requirements for gearing up for the Invasion of Japan.

She was still at that duty when one of her favorite moments in time occurred – August 15, 1945, when thousands of people gathered in Times Square to celebrate the end of war with Japan. The joy and exhilaration of the crowd is her strongest memory with the chant of “Peace, peace, peace,” everyone united in the conviction that another global war was unthinkable. 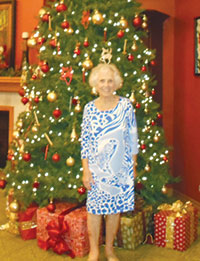 honorably discharged from the Navy. After a visit back at home with her family in Connecticut, Rachael was on the move again. Following several visits to the VA while in Bridgeport for monitoring of the corrective eye surgery she had undergone during her naval service, she was encouraged by her ophthalmologist, Dr. Lancaster, to study orthoptics. This is the study of eye movement disorders such as lazy eye (amblyopia) and crossed eye (strabismus).

After a three-month study program at Boston University, she began a long career as an orthoptist, which took her to several regions of the country. With the post-war babies being born, there was a demand for children’s health examinations and Rachael was involved in helping many pediatric ophthalmologists set up orthoptic services in their practices. Demand took her to Atlanta, Georgia, Monterey, California, Seattle, Washington, and Michigan. Besides testing the children, Rachael also offered follow-up services, teaching the kids eye exercises and ways to cope with their eye movements.

For many years, Rachael was a happy single career woman until she met Arthur Mann Klein. She was selling her home in Connecticut, after having lived on Marco Island part time for awhile. Arthur came to look at the home for possible purchase. During their conversation Rachael mentioned her line of work, orthoptics, which struck a chord with widower Arthur, whose son had had strabismus. This initial common interest led to them seeing other regularly and eventually a marriage. Arthur proposed on his 60th birthday, telling her, “I want you to be my birthday present.” They had an active social, happy life together for many years until his death. 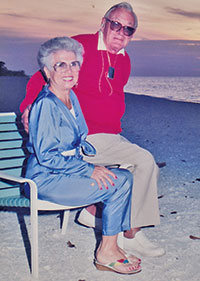 continued her interest in the orthoptics profession and still remains active in organizations associated with it. In 2001, while at a restaurant on Marco Island, she met Anthony “Gerry” Gerolamo, quite by chance. They became fast friends and constant companions until his death at the age of 99 on December 9, 2014.

In looking over the past few years, Rachael states that one of her most poignant moments has been the Honor Flight she took to Washington, D.C. When she visited the reflection pool at the National Mall with her guardian, she time traveled for a few seconds, jolted by memory of herself as a young woman, sitting there by the reflection pool eating her 25-cent lunch day after day, amid the temporary buildings that lined the mall. Now, 70 years later, the landscape has been transformed. The reflection pool is there, the Lincoln Memorial is in the distance and the Federal Reserve Building is still resplendent, but the temporary buildings are now gone, the last of them dismantled during the Nixon years, replaced with many new structures. She did not anticipate the emotional trigger of this mini “homecoming.” It was priceless.

Rachael celebrates her 95th birthday this month, January 2016. She moved off the island and is now living in Naples in an assisted living facility. Her megawatt smile has not dimmed and she spends most of her day at the computer staying abreast of the goings on in her orthoptics association, along with keeping up with friends and family members.

For her years of service to the U.S. Navy, both as a civil servant and as a member of the WAVES, we offer Rachael Pietrini Klein our salute!