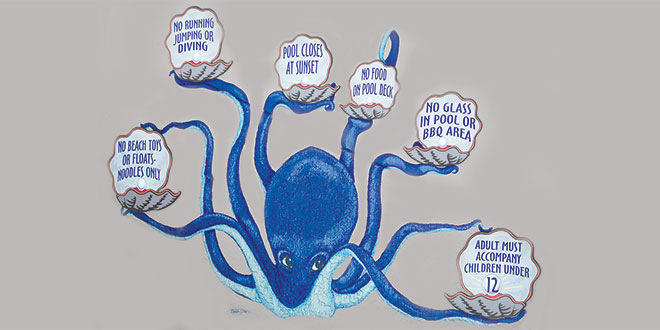 Ask Lon Boggs, manager of The Somerset of Marco Island condominiums, what his biggest on-the-job headache is, and he’ll answer right away: “signage.” Not the maintenance of 122 units, nor the comfort of all those residents and guests; not upkeep of the lush botanical grounds, two swimming pools, boardwalks to the beach, or all that infrastructure. And definitely not his A-team staff — who are responsible for seeing that his headaches are few. Nope, it’s signage.

“Well,” says Boggs, “we have a beautiful environment here, and I don’t like signs that disrupt the integrity of the architecture or landscaping, but if you make them too low-key then nobody sees them.”

And the headache of all signs? “Pool signs,” adds Boggs. “Because they aren’t just about information they’re about safety. The law requires that we post certain rules in an officially approved format, but nobody reads them. I even had some elegantly painted signs installed — nobody read them either. Still, I was determined to find a solution.”

That’s when he contacted fine-artist and muralist, Tara O’Neill. His idea was a mural at each pool that would be enjoyable and eye-catching and incorporate only the most important rules, the rules concerning safety.

“And what a great idea,” says O’Neill. “Coming up with concepts was a delight; the challenge was the rough concrete walls weren’t ideal for hand-lettering. I contacted Kevin Hauke from The Sign Artist to see if we could have the words printed on surfaces that would also function as part of my designs. He and his assistant Jason were great. With minimal consultations, the signs were printed on thin vinyl and adhered to quarter-inch sheets of PVC. I mounted them directly on the walls, giving a 3-D effect to the overall mural.”

The final result is the whimsical crossroads of safety and creativity, and the information is well worth the read!