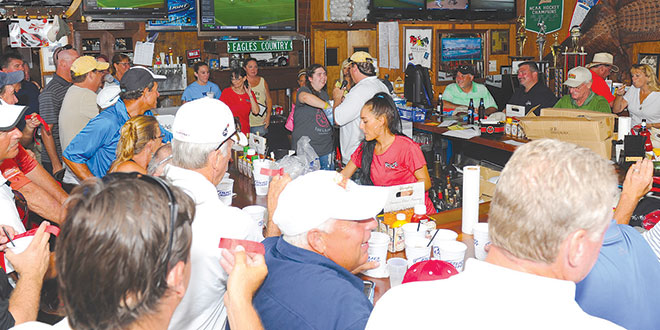 After the tournament, everyone headed to Rookies on Marco Island for food and more fun. PHOTOS BY VICTORIA WRIGHT

Avery McCaskill is an adorable, spunky, funny four-year-old. She likes to make funny faces, pretend she is a princess and play with her big sister, Kaleah. She loves hugs from her mom, Sondra, and her dad, William. Avery also is a fighter. The Golden Gate City child has been battling Leukemia since February 2013.

That is why for the second year in a row Marco Island’s Rookies Bar & Grill has held its annual golf tournament in honor of little Avery, with all proceeds going to her family to help with the costs of her chemotherapy treatments and doctor bills. This year, 144 golfers met on a sunny day in June at Lely Resort’s Mustang course to raise about $6,000 for Avery and her family.

“As long as she is fighting, we are fighting,” says Bruce Bell, Rookies’ owner. “When 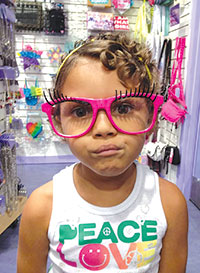 Four-year-old cancer patient Avery McCaskill clowns around for the camera.

someone is fighting cancer, there are always things that need to be taken care of.”

Bell would know. Years ago, his wife, Laura, lost here brother, Michael, to cancer. The husband and wife decided then that they would develop and host a charity golf tournament that would benefit kids with cancer and their families. They have been holding the tournament on and off for more than 20 years now.

This year’s event sold out in about a week-and-half, Bell notes, and many of those who came to play are faithful to the Rookies tournament. “Some of these folks only play in our tournament. I mean they don’t play golf at all until our tournament. There are a lot of new shoes on the course,” he says.

The support and prayers are welcome, says Sondra. “I can’t even tell you what it does for us,” 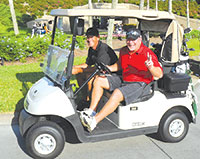 These two are ready for a day on the fairway for a good cause.

she adds. “It has been overwhelming how many people have stepped up.”

In addition to the Rookies’ golf tournaments, all of the proceeds from the Sand Bar’s Fifth Annual Tour de Taverns held last October went to Avery and her family too. “It was just amazing,” Sondra notes. “For the most part, we feel like we live a normal life, but the bills keep coming. That is one of the biggest blessings that we continue to have the support of so many in the community.”

It seems, though, that Avery’s story is ultimately one of hope. The aggressive chemotherapy treatment used to combat her Leukemia had her in remission by day eight of treatment. According to Sondra, the two-year treatment begins by destroying the blood cells completely and then slowly rebuilding the patient’s system.

Currently, Avery is in the maintenance phase of her chemo 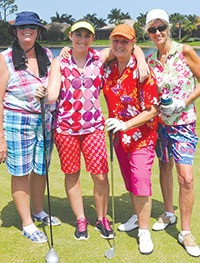 This team came dressed to play.

treatment and will remain there until early next year. The goal: To keep the Leukemia from returning. Most of her treatments are done at home, with the occasional visit to the clinic for blood tests or other procedures.

All in all, Sondra says, “she is doing good. She has her ups and downs. Her counts tend to fluctuate, but for the most part, it has been an incredible journey… It has taught our family more about ourselves than we thought we would even know. It puts you in a different perspective of life. I feel like I would never have been so appreciative of life. Every moment is so special now.”

The team at Rookies already is looking forward to next year’s tournament, and Bell hopes Avery is able to make a special appearance. “If she still needs us, we will be there,” he says.