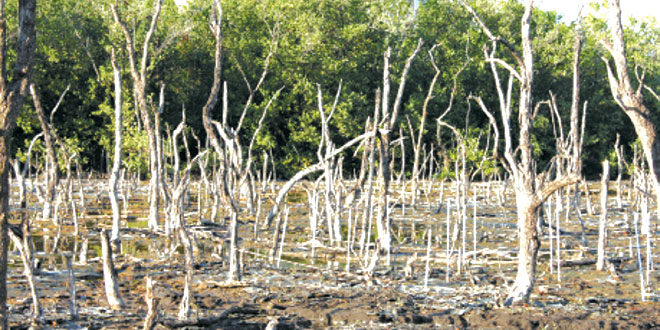 A reference point within the die-off area is marked with white rope.

USGS awarded funding to this project for a minimum of three years to assess the hydrologic restoration, which now is partially underway. Since 2000, Rookery Bay Reserve has partnered with the Coastal Resources Group, the U.S. Fish and Wildlife Service, the Conservancy of Southwest Florida and the city of Marco Island to conduct the initial assessment of the area’s hydrology and produce a plan for restoring the affected mangrove forests.

This will be the first time Rookery Bay has partnered with the USGS to work on the mangrove restoration inside the reserve.

Jeffrey Carter, stewardship coordinator for Rookery Bay Reserve, explains: “This research can help us get a better understanding of mangroves’ response to restoration efforts. We expect the results from the study will enable us to more effectively manage these resources and be better prepared to meet future environmental challenges.”

The problems for the mangroves are nothing new to the residents of Marco Island and Goodland. In fact, the trouble began in 1938 with the construction of State Road 92, which greatly altered natural tidal flushing to mangrove wetlands in the area. Specifically, incoming flow from higher tides inundates the forest but cannot readily be flushed out, creating a “bathtub effect” that holds the water for longer periods than these forests would normally experience. Summer rains compound this effect. 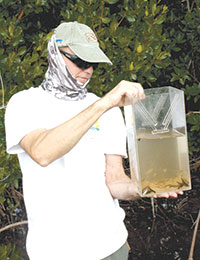 Following the heavy, flooding rains from Hurricane Andrew in 1992, the area experienced a slow, steady die-off of approximately 65 acres of mangroves.

According to Robin Lewis III, a Certified Senior Ecologist of the Ecological Society of America, a Board Certified Environmental Professional, Professional Wetland Scientist and President of Coastal Resources Group, Inc., one of the main restrictions to the tidal exchange along SR-92 is the existence of a single 54-inch culvert located under the road that connects one side of the road to the other. While it is supposed to allow for the tidal exchange, it is more than 75 years old, and Lewis says, the normal lifespan of such culverts in saltwater is typically 50 years.

The flow of tidal waters is necessary for the survival of these mangroves. The road has disrupted the flow of the area’s natural tides, causing parts of the mangroves on both sides of the road to flood and die. Roots of the black mangrove, called pneumatophores, shoot up out of the ground to gather oxygen. When they are constantly covered in water, they don’t receive that oxygen and they die.

Scientists from the Conservancy of Southwest Florida have been monitoring the area for the last 14 years. Over a period of four years, beginning in 2000, Kathy Worley, director of environmental science and a biologist at the Conservancy, studied the mangroves, referencing 17 plot points in various health phases. The study not only proved that the mangrove die-off was getting worse, but also proved why they 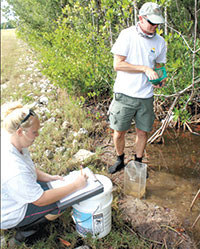 Jackie Fisher records type and size of fish as Dr. Schmid sorts through the water sample. PHOTOS BY NATALIE STROM

were dying — the altered hydrology.

Enter Lewis and a two-phase plan for mangrove restoration. He has worked with Rookery Bay, U.S. Fish and Wildlife and The Conservancy of Southwest Florida, to implement the plan. Phase I began in 2011 with Conservancy researchers monitoring the mangroves. In February 2012, the historic tidal channel that exists near Steven’s Landing on the north side of SR-92 was reestablished. By clearing those channels, proper water flow was restored.

Scientists monitored water quality and wildlife — fish and invertebrates — in the water around the mangroves by taking samples and comparing them over time. The team also recorded every mangrove tree within every reference point, tagging and measuring diameter for growth.

By December 2012, there were signs of life in the mangrove die-off area, as species of fish not initially found there were discovered in water samples. The mangroves have been monitored in this fashion every three to four months since then.

“Mangrove seedlings have been taking root, and it is beginning to look like there are signs of life,” says Rookery Bay’s Communications Coordinator Renee Wilson.

Phase II of Lewis’ restoration project, which consists of maintaining the original culvert while installing three additional 48-inch culverts across SR-92 and clearing additional channels on the south side of the road, has yet to be endeavored. The reason: It has a hefty price tag of $600,000.

According to Wilson, the new Rookery Bay-USGS project will propel the research already conducted forward, studying the results of the restoration that is yet to be completed and

Sheepshead minnows are commonly found in mangrove systems. They have a high tolerancefor salinity which means they can survive in very harsh mangrove conditions

monitoring how the area’s hydrology is changing.

In August 2013, a series of small trenches were excavated to re-establish tidal connection to one acre of a four-acre die-off area. Within one year, the return of normal tidal flushing has produced a dramatic response — mangrove seedlings are taking root and many of the characteristic fish, crabs, snails and other species have moved in. The project partners are still seeking additional funding to restore flushing to the remaining 224 adjacent acres. It is on the list of projects under consideration for federal funding through the Resources and Ecosystems Sustainability, Tourist Opportunities, and Revived Economies of the Gulf Coast Act (RESTORE Act).

“We have examples of how hydrological restoration works in other locations,” said Kevin Cunniff, research coordinator for Rookery Bay Reserve. “A long-term assessment of forest community change and recovery over the next decade will provide invaluable information regarding the resiliency of our mangrove wetlands and the cost/benefits of restoration.”