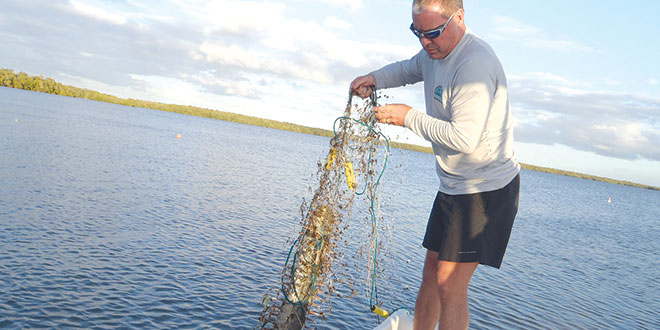 March 7 was a big day for Rookery Bay Reserve Fisheries Biologist Pat O’Donnell and his volunteers. The team captured three endangered smalltooth sawfish (Pristis pectinata) in Fakahatchee Bay while out on its monthly shark monitoring and tagging program. The biggest — a female measuring nearly 15 feet — is the largest sawfish captured by Rookery Bay since May 2000.

It is no secret that many species of shark come into shallow, protected estuarine bays of the Ten Thousand Islands to give birth to their young. These back bays provide young sharks with plenty of food and protection from potential predators, such as larger sharks. Rookery Bay began its monthly shark monitoring and tagging program 14 years ago in order to gain an understanding of

shark nurseries and relative distributions before, during and after the restoration of the Ten Thousand Islands watershed.

One very important piece of information gleaned from this project is that Southwest Florida estuaries are important nursery habitats for the endangered smalltooth sawfish. In fact, Southwest Florida estuaries have the greatest concentration of smalltooth sawfish in the world. These fishes are closely related to sharks and rays with skeletons composed of cartilage. Their distinctive rostrum (nose) has about 30 teeth on both sides and is used for defense and hunting prey. While monitoring the local shark population over the past 14 years, Rookery Bay fisheries research has captured 36 different sawfish, and 10 of of those fish were recaptured at least once. 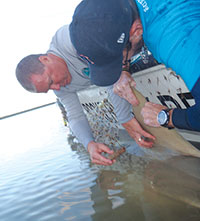 A volunteer helps secure the sawfish as PAT O’Donnell prepares to insert the tag.

sawfish were captured, measured, tagged and released. Four of those individuals were recaptures. The growth data obtained from these recaptures contributed to a scientific journal paper that suggested these fish exhibit substantially faster growth rates than previous literature has reported. Within the last two years (Feb 2012 – Mar 2014), 17 juvenile and one sub-adult female sawfish were captured, tagged and released. All of these tagged sawfish, except the one large female, were eight feet or less and assumed to be one to two years old.

Researchers noticed that the big catch in March had 3mm thick monofilament fishing line wrapped around her head causing deformation near the right eye and right spiracle (organ used in water exchange). Once secured to the side of the

Evidence of a previous encounter with 3mm thick monofilament line is clearly seen behind the sawfish’s eye.

boat, she was measured and tagged, and a fin clip sample was taken for genetic analysis prior to her safe release. The other two sawfish caught that night both measured around eight feet. One of those had been tagged previously by the National Marine Fisheries Service near Pavillion Key in Everglades National Park 17 months prior.

Sawfish can be extremely dangerous. Anyone who encounters one must be extremely careful of the toothed rostrum (nose), which can slash through human skin with ease. Because they are protected by federal law, if you happen to catch a sawfish while fishing, it is very important to ensure the minimum amount of fishing tackle remains with the sawfish following release.