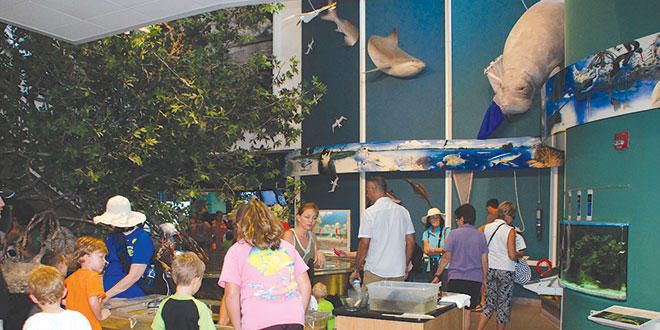 The sky was clear. The sun was shining, and the parking lot of Rookery Bay National Estuarine Research Reserve was packed on Saturday, Sept. 27.

The occasion: National Estuaries Day, an annual event established in 1988 as part of Coast Weeks to help educate the public and promote the importance of estuaries and the need to protect them.

Rookery Bay is one of 28 national estuarine research reserves, and the local crowd celebrated the day in fine style, with guided boat expeditions of the estuary, kayak and paddle board adventures on Henderson Creek, behind-the-scenes laboratory tours, a marine-critter touch tank and other live animal presentations, face painting, fish printing, educational booths, live music and food. There also was a special

So, what is an estuary you may ask? Simply, it is the thin zone along a coastline — such as bays, lagoons, sounds or sloughs — where freshwater systems and rivers meet and mix with a salty ocean, creating a brackish water environment that provides a safe haven and protective nursery for small fish, shellfish, migrating birds and coastal shore animals. In the U.S., estuaries are nurseries to more than 75 percent of all fish and shellfish harvested.

Rookery Bay encompasses 110,000 acres from Gordon Pass through the 10,000 Islands, and is home to some 150 species of birds, as well as many threatened or endangered animals. The history of 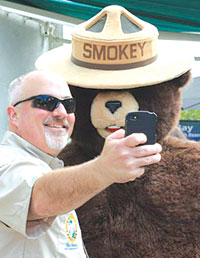 the reserve dates back to a 1964 grassroots effort to stop the construction of a 10-mile loop between Naples and Marco Island. Dubbed the “Road to Nowhere,” the road would have cut through the pristine mangrove wetlands surrounding Rookery Bay. Some 1,000 signatures were collected in two days demonstrating local opposition to the road.

By 1971, nearly $2 million had been raised to buy up land around Rookery Bay. Local residents, the Collier County Conservancy (now the Conservancy of Southwest Florida) and The Nature Conservancy organized the funding, and additional lands were donated. In 1972, the Coastal Zone Management Act set the stage for the creation Rookery Bay National Estuarine Research Reserve, and in 1978, the reserve received its official federal designation.

then, Rookery Bay’s staff of 35 and army of 300 volunteers have worked as stewards and scientists of the estuary area. Not only do they maintain the land, but they also collect, monitor and analyze data on the flora and fauna in the estuary in an effort to show changing conditions in the environment and possibly provide clues as to why the changes are happening. All of this is done on a budget of state and federal funds totaling just under $1 million.

During National Estuaries Day, my husband, daughter and I were lucky enough to take part in one of the 75-minute guided boat tours of Rookery Bay. The tours departed from the reserve’s property on Shell Island Road, and our tour was guided by Alberto Chavez, an environmental manager at Rookery

Bay. The boats for the tours were furnished by Everglades Area Tours and Good Fortune II Nature Cruises and Charters courtesy of the Conservancy of Southwest Florida.

As we cruised through the tannic waters surrounded by a maze of mangrove islands, Chavez told us that mangrove estuaries are one of the most productive ecosystems on the planet, right behind rain forests and barrier reefs. “These waters give life to about 90 percent of what lives in the Gulf,” he said.

According to Chavez, the work done at Rookery Bay runs the gamut — from educational programs for elementary, middle and high school students to research studies on pythons, saltwater crocodiles and sharks to sea turtle and bird nest counts to water salinity, turbidity, 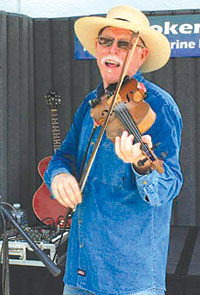 pH and nutrient monitoring. Chavez himself is responsible for starting Rookery Bay’s education program for landscape companies, which works with these firms on proper application of pesticides and fertilizers in an effort to limit their impact on the estuary.

He talked about the important impact this work has on the birds and wildlife nesting and living in the “rookery” — a place where seabirds nest — and how it helps maintain the estuary, which rose out of the water 15,000 years ago thanks to mangrove seedlings planting themselves into countless oyster beds. As our tour came full circle, we saw first-hand what he meant.

There, next to the dock, was an oyster bed with a couple of new mangrove seedlings sprouting, reminding us of the ever-present, ever-changing ecosystem in which we live.