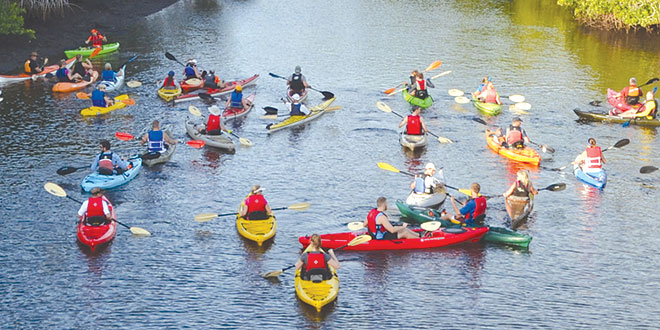 The colorful boats waiting at the starting line enhanced the natural beauty, so rich at Rookery Bay. PHOTOS BY MELINDA GRAY

On Saturday, Nov. 22, a rainbow of colorful kayaks in an array of shapes and sizes filled Henderson Creek, behind the Rookery Bay Environmental Learning center. Kayakers and runners of mixed experience levels enjoyed the clear, beautiful morning as they awaited the start of the 5th Annual Rookery Bay Adventure Race. Onlookers lined the bridge above the starting line, each hoping to get the best view of the two-part race while admiring the assortment of crafts below.

Hosted by Friends of Rookery Bay, the yearly event is run by Up A Creek Kayak Tours, owned by race director Susan Cone and her husband George. The fundraiser is their way of thanking Rookery Bay for the use of their paddle park throughout the year. All proceeds go to Friends of Rookery Bay, which in turn goes to support programs at Rookery Bay National Estuarine Research Reserve and its Environmental Learning Center, as well as at schools, libraries and beyond.

“One of the things I love about this is that there are so many different kinds of kayaks: short, long, skinny and colorful,” said Susan as 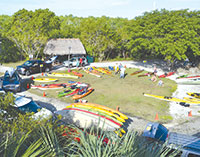 The multi-colored kayaks all rested on the lawn after a hard race well-fought.

she watched the paddle race below.

The day began with a 4k paddle that took participants up the creek and then back to where they had started. After pulling their kayaks out of the water, they set off on the second leg, a 3k leading first, up the steps, then across the bridge and past the crowd of cheering friends and family, and finally, making two loops around the facility’s walking trail, before coming back to the finish line on the bridge.

The water level was nearly as low as it gets there, measuring just four feet in the center of the creek, and oyster beds along the sides made for some interesting navigation. Susan said she had many friends and even some family in the race. She was on hand to lend a little encouragement to passing runners, some already tired from paddling through the shallow water. As each one passed, she motivated them by saying things like “looking good” or “enjoy the beautiful trail.”

“The first year we did this, the water level was even a little bit lower than this; people had tarpon running 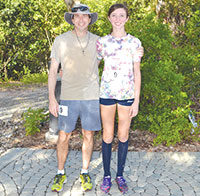 into them,” said Susan.

Volunteering Naples High School students were strategically placed on the trail to offer water to the hard-working runners as they rounded the corner for their second loop.

David Welch of Port Charlotte was the first kayaker to make it back to shore, where his daughter, Madison, waited to begin the run, her part of the relay. A cross-country runner at her high-school, Madison finished the course and ran through the finish line in less than 14 minutes, securing the team’s first place spot at the event.

“This was Madison’s idea. I was a little worried, but she told me ‘Dad, we can do it!’” said David.

He said he was so thankful for this race. After serving two tours in Iraq in the United States Air Force, his health was suffering; he weighed 203 lbs and was hypertensive. It had been 10 years since he last paddled, but with the encouragement of his wife and the eager participation of his daughter, he’d trained hard for the last three months and lost 46 lbs to prepare.

Their hard work paid off, and they said they look forward to participating again.