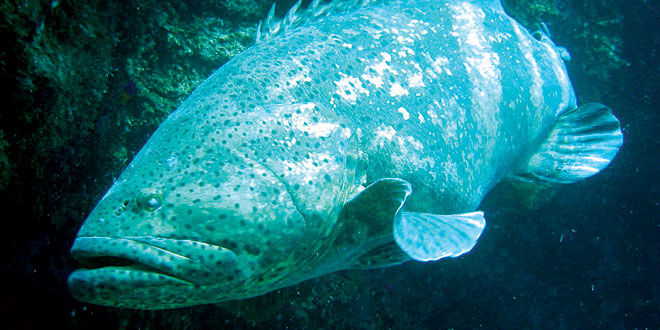 Red tide blooms have been rolling along the coastline of southwest Florida since early last fall, and Marco Island has not been immune to their effects.

According to the Florida Fish and Wildlife Conservation Commission, Marco Island started presenting “very low” to “low” concentrations of red tide in early December. By mid-February, those concentrations crept up to “medium” status.

Left in their wake have been wracking, hacking coughs and breathing problems for those on land, and a slow, suffocating death for those under the sea. Dead fish of all varieties — including Goliath Grouper — have been seen floating in canals and washing up on shore. Florida Wildlife Commission is so concerned about the Goliath Grouper mortalities that it has set up a protocol to report the dead fish if observed.

Worse yet, 184 manatees have been found dead within the known red tide bloom boundary. Four of them were recovered from waters around Marco Island: one in Rookery Bay on February 10th; one in Henderson Creek on Febryart 16th; one in Sanctuary Sound on March 4th; and one at Residents’ Beach on March 13th.

“This is a record number of mortalities to date since regular monitoring has occurred,” says Nancy Richie, Environmental Specialist with the City of Marco Island. “The last year it was this bad was in 1998-1999, when around 150 manatees died.”

To be sure, the harmful algal bloom known as red tide is nothing new to the southwest coast of Florida.

“Based on reports of extensive fish kills and incidents of shellfish poisoning with unique symptoms, red tides have been documented along Florida’s central west coast since the 1840s — long before extensive settlement — and severe red tides have been observed in each decade since,” explains Bryan Fluech, director of the Florida Sea Grant Collier County Extension.

“Fish kills around Tampa Bay were 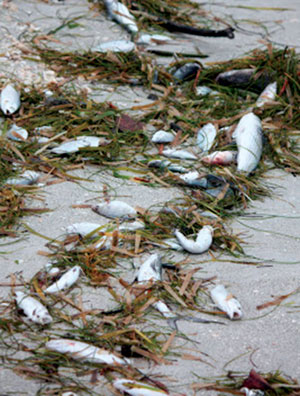 In Florida and the Gulf of Mexico, a naturally-occurring dinoflagellate called Karenia brevis, or K. brevis, causes most red tides. Scientists refer to a K. brevis bloom as a “Florida red tide” to distinguish it from other red tide-producing species.

According to Fluech, red tides develop under the right combination of biology, chemistry and physics, and when these conditions are favorable, K. brevis can reproduce very quickly — every 48 to 120 hours — through cell division, creating a bloom.

Depending on the duration and severity of these blooms, they spell big trouble for anyone in their paths for two reasons. First, red tides produce a neurotoxin that inhibits breathing, and second, oxygen is sapped from water when the red tide cells die along with the marine organisms they attack.

In fish, red tide paralyzes the gills and robs them of oxygen. Slow-moving fish and bottom dwellers are most susceptible, but invertebrates such as shrimp and crabs are affected as well. While bivalve species like oysters and clams can filter red tide toxins from their systems after three to six weeks, they are still vulnerable because of the low oxygen levels in the bloom-infested water.

Marine mammals such as manatees can be particularly susceptible to red tide events as toxins can be directly inhaled or consumed with aquatic plants. Shorebirds and wading birds also have been victims of red tide toxins.

People — especially those with respiratory problems, such as asthma — are affected too when the red tide toxin goes airborne. “At times in the past, I could definitely feel it in my lungs when I went out to the beach,” notes Fluech. “My wife seems to be more sensitive to the 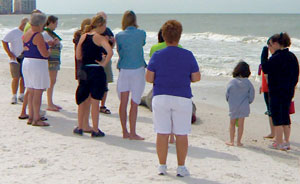 On March 13th, beach goers gathered around a dead manatee that had washed up on Residents Beach.

airborne toxins than I. She picked up on it quicker than I did.”

Still, there are some unknowns about red tide.

While some 70% of red tide blooms occur between August and February, the exact combinations of biology, chemistry and physics leading to a bloom’s inception are unclear. Further, there is disagreement between the scientific and environmental communities as to whether red tide blooms are happening more frequently, are more extreme or are fueled by the presence of fertilizers and pesticides in stormwater runoff.

“I think red tide presents a unique educational opportunity for our residents and visitors,” says Fluech. “There is no doubt these events can have negative effects on marine life, human health, as well as our coastal economies. However, they are a natural part of our system like hurricanes, and just like hurricanes, it is important that citizens educate themselves about these events as they will continue to happen in the future.”

To this end, Richie encourages all coastal residents to be aware of what they are putting in the ground and how it impacts the environment. “Especially on Marco Island, surrounded by the Gulf and river, with hundreds of miles of canals, everything is washed to the surface waters,” she notes.

Still, there is good news for Marco Island when it comes to red tide. It has been nearly a month since any red tide was detected in the waters around Marco Island. Moreover, it appears local businesses have survived the tide with few ill effects. According to Sandy Reideman Lazarus, Executive Director the Marco Island Chamber of Commerce, no chamber members have reported any major issues resulting from red tide.

“The beaches have been very busy, but there is concern by visitors and residents alike about how the red tide status can affect their beach days,” says Richie  “Every day, the city receives a few phone calls for the latest status.”