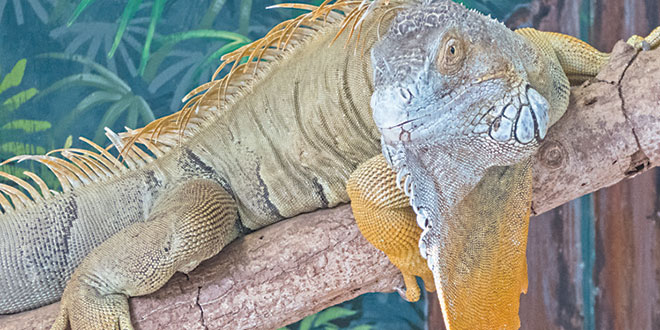 Up close and personal with an iguana.

When I was growing up in the Northeast, my father loved road trips. He also loved roadside attractions. I think his favorites were Roadside America, an indoor miniature railroad and village in Pennsylvania and Santa’s Village in New Hampshire. We spent long summers in northern Maine, which meant frequent trips to New Brunswick, Canada, which had its own attractions. We never crossed the border without a stop at one of them…Magnetic Hill where cars appear to roll uphill, the longest covered bridge in the world that crosses the St. John River, the giant “flower pots” formed by the tides in the Bay of Fundy.

It is a shame we never ventured further south in the car than Virginia (Luray Caverns, of course), as the south and, Florida in particular, was home to so many roadside attractions popular in the 50s. Of course, Southwest Florida still has quite a few and, until recently, I had never visited any of them. I don’t consider our federal and state parks and sanctuaries as roadside attractions.

A friend with whom I usually make treks to places like Shark River Valley or the Bird Rookery Swamp suggested a day trip to the Everglades Wonder Gardens in Bonita. “They have flamingos,” she said. Flamingos? Oh, Dad, I thought, too bad you aren’t here; you would love a place with flamingos. She added, “we can stop at Trader Joe’s on the way home.” Shopping? “OK, I’m in,” I said. 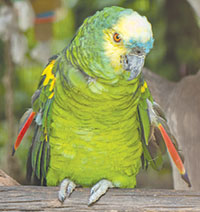 One of the many colorful birds at Everglades Wonder Gardens.

Wonder Gardens is located on Old Route 41 in Bonita Springs. Turning onto Old Route 41 is like a drive back in time to Old Florida. Old Route 41 is a world away from the “new” one. The street features one-story wooden buildings painted pastel tropical colors and housing businesses such as ice cream and antiques shops. The side roads leading off it are shaded by lush hardwood hammocks; slash pines, native to the area, are seen throughout. The road crosses over the Imperial River. The downtown park was set up with tents and tables for an upcoming “Taste of Bonita” festival. We had to make a slight detour as part of the road was closed for revitalization. The city council has embarked on a project to improve the downtown area while trying to maintain its historical charm.

Opened in 1936 by two colorful characters, brothers Bill and Lester Piper, whose history included being retired moonshiners, the Everglades Wonder Gardens remained a typical roadside attraction until 2013. In its heyday, the 3.5-acre landmark featured such animals as panthers, bears, crocodiles, alligators, an African lion and an African black jaguar.

When the Piper family closed down the Gardens, John Brady, a Florida landscape photographer leased the attraction and began work to turn it into more of a botanical garden while still preserving some of the other attractions. The Gardens now functions as a not-for-profit entity whose goal is to preserve and improve it.

We accessed the Gardens through 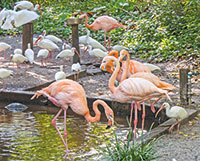 one of the original buildings, which now houses the gift shop, gallery of John Brady’s photos, and small natural history museum. A diorama is being created that will feature some of the more dramatic animals who once roamed these grounds.

Two friendly and helpful women told us more about the history of the Gardens, its present day status, and future plans. Their enthusiasm was infectious. What we found most interesting is that one is the daughter of the mayor, the other a member of the Bonita Springs City Council. We were told that the City Council lent $3.5 million dollars to the Everglades Wonder Gardens non profit group to help purchase the property and ensure it’s preservation. Oh my, my friend and I thought, we certainly had stepped back in time!

As we entered the Garden, we were greeted with the thunderous bellowing of alligators; it was mating season we were told. The 40 that reside there are safely enclosed, but there is a swinging bridge that allows visitors to walk over the gator-infested water. It is netted, of course. A sign warns, “Do not stand, sit, climb on this enclosure. You might fall in and the alligators will eat you and that could make them sick.”

As part of the rebirth of Everglades Wonder Gardens, the mammals have been removed. Remaining are various native and exotic species of reptiles and birds and a koi pond. All of them are either from the original roadside attraction or

are rescue animals. The snakes range from typical Florida corn snakes to terrifying boa constrictors. There was a huge iguana that looks just like the one that lives in the empty lot across the canal from me, and a monitor lizard with its creepy, darting forked tongue. The many turtles and tortoises included African Black turtles and local gopher tortoises. Incidentally, in case you wondered, the difference between turtles and tortoises is that the former can live in water, while the latter live on land.

Birds included a variety of parrots and cockatoos, wood and mandarin ducks, some exotic looking roosters and/or quail, peacocks, even parakeets. Some of the parrots were quite polite, greeting us with “hello” and being certain to say “goodbye” as we walked away. And, yes, there were flamingos. They remain from the original attraction, having been born here some thirty years ago. They were surrounded by dozens of ibis. The ibis do not belong to the Gardens; they merely visit every morning for breakfast with the flamingos.

The lush, jungle like flora was diverse and included old growth trees, some exotic species, and newly introduced varieties such as bromeliads and stag horn ferns. Kapoks, banyans, shaving brush, African mahogany, plumeria were just a few noted. There is an Orchid Trail as well as a Butterfly Garden.

Everglades Wonder Gardens is a work in progress. Many of the animals and some of the plants had identifying signs. Some areas lay empty, waiting for renovation 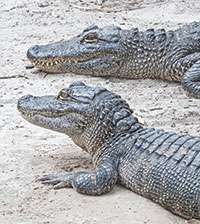 Two of the 40 gators sun themselves on the beach.

or innovation. The reinvention of this former roadside attraction is new and it will be interesting to follow its progress. My friend and I commented how nice it would be if a student or retired botanist would volunteer to assist in further identifying and working with the beautiful greenery that is there.

Everglades Wonder Gardens is open daily from 9:00 AM to 5:00 PM, except for major holidays.

This year, they are introducing what they hope will be an annual contest/event, Snowflakes in the Gardens. The snowflakes will be on display until January 2, 2016 and follows their successful Ghosts in the Gardens contest for Halloween. They also offer a Lunch & Learn Lecture Series on the first Wednesday of every month. Memberships are available.

We enjoyed our visit to the Gardens; it made a pleasant day trip. And, kudos to the people involved in this non-profit organization as well as the Bonita Springs City Council for their efforts. How wonderful that this reminder of Old Time Florida will remain, rather than being replaced by yet another condo development or shopping mall.