ROAD UNDER WATER Funding and ecological hurdles for Goodland Drive 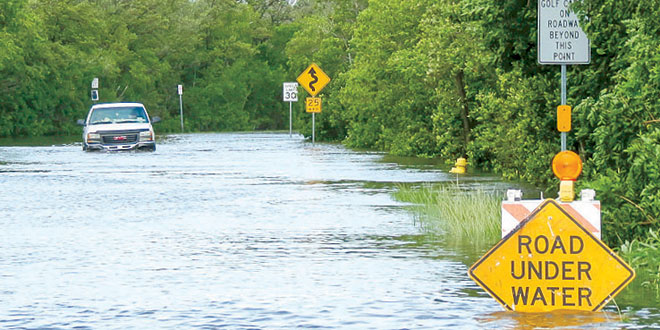 An historical anecdote says that the road into Goodland was originally built out of shell sixty years or so ago by a man named Henry Pettit with just a shovel and a wheelbarrow. Goodland residents today find the old road’s twists and turns endearing, but not the way it frequently floods and traps them on or off the island. Goodland Drive (92A) was first given over to the city of Marco in 1999 by Collier County, and Goodlanders and the city have been wrangling over how to maintain the road ever since.

At the heart of the needed fix isn’t simply a repair job, but an expensive and environmentally sensitive engineering project to raise the road that would tally in the neighborhood of 2.5 million dollars, according to city Public Works Director Tim Pinter, who did the preliminary plans and grand funding research for the road. Pinter says a topographical survey showed the exact condition of the road. “Its average elevation is three feet, zero being sea level. We have tides higher than three feet.” 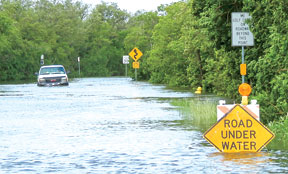 County petitioned FEMA for grant money from flood mitigation programs but the project was turned down. The road winds through a large mangrove forest and wetlands, so significant changes in width of the road are not allowed and the permitting process alone requires its own consultant, thousands of dollars, and several years to complete.

County Commissioner Donna Fiala is also seeking a solution to the outdated road. “There are a lot of environmental issues along that road that concern the Conservancy, mainly the mangroves, which means the road will probably have to be elevated.

The flooding in Goodland seems to get worse every year. That flooding is salt water, yet there is die-off of the mangroves in the area; probably from the water being blocked on one side of the road.”

Although a paving job is no permanent fix to the road’s woes, the city does receive money from the county for road maintenance in general. An interlocal agreement signed in 2002 provided for $1 million in funding per year for 15 years. It ends in 2017. Fiala points out that it was her understanding

High tides often leave water on 92A but the storm surge due to Tropical Storm Isaac left Goodland residents trapped for the day.

that some of that money would be directed at Goodland Drive. “[We] requested that they use some of the money to upgrade and improve 92A.”

Pinter explained that the $1 million goes into the city CIP (capital improvement projects) fund. “It encompasses all public facilities in the roadway.” Of that budget, $400,000 has been earmarked in Fiscal Year 2013 for road resurfacing. The challenge for Pinter has been prioritizing repairs to all 126 miles of roads on Marco. “We’ve spent between 50 and 100 thousand dollars over the years maintaining 92A.”

He adds that correcting Marco’s own flooding issues is a higher priority this fiscal year. “There are roads here in a more severe state, with higher traffic use. Barfield and Yellowbird are my priorities this year.”

Fiala would like to find progress on the issue. With a newly elected council that ran on a platform of reduction in public spending, she may have her work cut out for her. “Hopefully something can be worked out soon with Marco, but the raising of the road will be very costly, so I don’t know how soon it can be accomplished.”