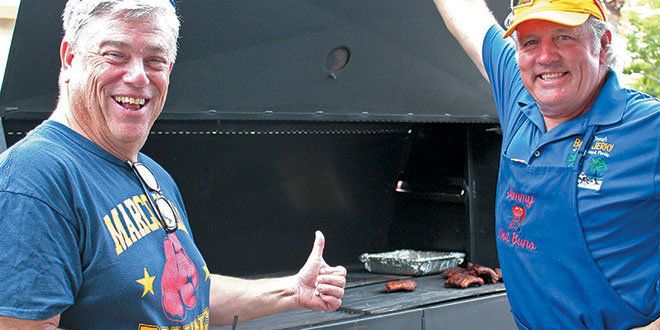 Rich Stoltenborg and Jim Downey were all smiles as they showed off Downey’s grill. Photos by Samantha Husted

It felt like a summer block party or a family reunion. Outside the Brewery there were four large tents with five grills occupying them. Smoke filled the air with its sweet smells, inviting those who passed by to join in on 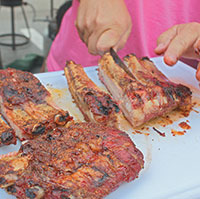 the fun. Contestants drank, barbequed and graciously handed out ribs.

This year there were six teams competing for the first place prize, which entitles the winner to a whole year’s worth of bragging rights. After all, what better way to boost a man’s ego than by telling him he’s the best at barbecuing?

The competition was heated, literally. Despite the day’s incredibly high temperatures, the contestants labored nonstop as they prepared their ideal ribs, each bringing to the table their own secret weapon in an attempt to woo the judges. For instance, 2014 Rib Cook-off champion Conner Riddle remained very tight-lipped about his special 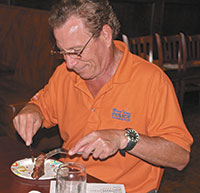 barbecue sauce, which he generously brushed over his ribs. Jimmy and Dale Downey, a husband and wife duo, objectively had the biggest grill. It was their pièce de résistance. The Downey’s grilled 12 slabs of ribs, or about 25 pounds of meat, in their massive, cookout-style grill.

At 5 PM, after a strenuous day of barbecuing in which each chef gave it their all, it was time for the judges to meet. In a blind tasting the judges, many of whom were police foundation members and city personnel, had to rate each rib on a scale from one to 10 based on taste, 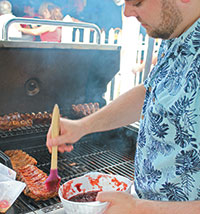 Conner Riddle brushing his ribs with his secret BBQ sauce.

smell and texture. Police Chief Al Schettino was also present at the table inspecting the ribs carefully before giving it a thoughtful bite.

In the end, only one person could take home the first place prize and the glory that comes with it. This year the 2016 Rib Cook-off Champion was John LaCava, a first-time winner. Brothers Chris and Ross Broxson came in second place and Mikey Dechaine in third.

“We raised $6,800,” said Marco Island Police Foundation President Curt Koon. “Most of it due to the generosity of the Brewery, the staff and the LaCava family. It was a great year. It’s the best year we’ve had.”