Return of the Ringed World 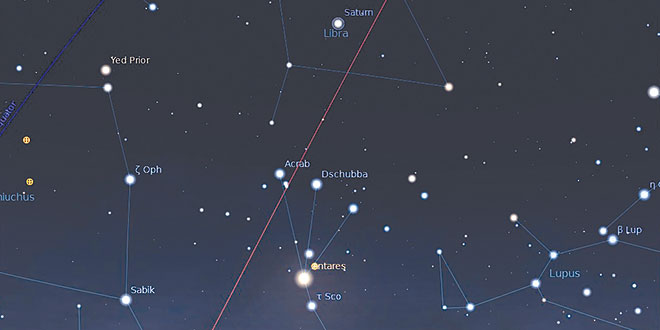 Now that we stand on the doorstep of May, the days are longer and the nights become cloudier. Usually the clouds are gone after midnight, but that is too late for most casual stargazers; a good compromise is 11 p.m. when the clouds start breaking up. Perhaps you can sneak some stargazing in when you take the dog out for a late evening trip.

Saturn returns to the evening sky this month and is well up by 11p.m. Saturn is a magnificent sight in a small telescope; at about 30x to 50x magnification the rings appear. This year, the rings are strongly tilted towards Earth making Saturn somewhat brighter than last season. The rings are well beyond the reach of standard binoculars, but Saturn’s giant satellite, Titan, is visible in 9x50s Look for a 9th magnitude point just to the left of Saturn. These instructions are only valid for the 2nd of May – Titan moves!

Saturn will be residing in the constellation Libra (the scales) for the rest of the year; Libra is the only zodiacal constellation that does not represent a living creature. Libra has a somewhat mixed history as a separate constellation. The Greeks tended to think of the stars of Libra as the scorpion’s claws while the Romans preferred to split it off as a pair of scales. It is represented in the sky as a quadrilateral of medium-bright to dim stars that requires a fairly dark sky to easily see it.

The star in the upper left of the quadrilateral, Zubeneschamali (I love that name), is the center of two minor mysteries. Ancient observers remarked it was the only star in the sky that was greenish in color and also stated it was brighter than the nearby Antares! Three hundred and fifty years later it was stated that Antares and Zubeneschamali were of the same magnitude. It is unclear if Antares has grown brighter or Zubeneschamali has become dimmer; today Antares is over 1.5 magnitudes brighter. As far as color is concerned, modern observers mark Zubeneschamali definitely as blue. (It should be noted that at magnitude 2.6 it shows little, if any, color to the naked eye).

Mr. Usher is a Director of the Everglades Astronomical Society, which meets the second Tuesday each month at 7 PM in the Norris Center, Cambier Park, Naples